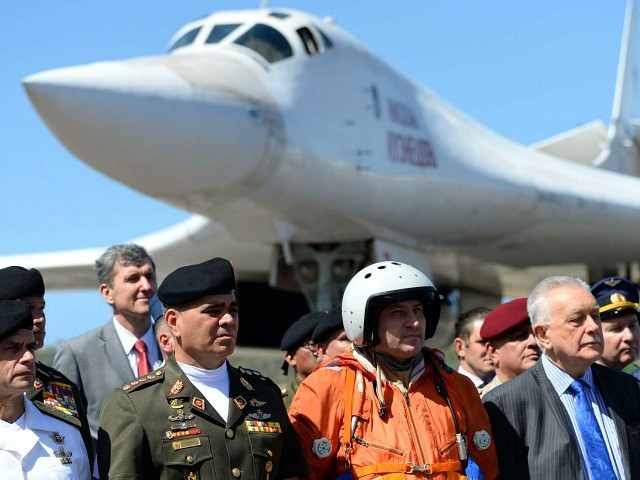 Russia reportedly decided to pull nuclear-capable jets from Venezuela following a diplomatic spat with Washington over their support for the Maduro regime, the White House confirmed on Wednesday.

This week, Russia placed two nuclear-capable Tupolev Tu-160 strategic bombers in Venezuelan territory and showed them off in the skies as a show of force for the Maduro regime.

“During the international visit of the Aerospace Defense Forces’ delegation to the Bolivarian Republic of Venezuela, pilots of strategic bombers Tu-160 conducted a flight in the airspace over the Caribbean Sea. The flight lasted for about 10 hours,” the Russian Defense Ministry’s press service said on Wednesday.

“In certain parts of the route, the flight of Russian bombers was conducted together with Su-30 and F-16 fighter jets of the Venezuelan National Bolivarian Military Aviation,” they continued. “The pilots from the two countries practiced air cooperation when fulfilling air tasks.”

The move drew up immediate anger from the United States, with Secretary of State Mike Pompeo denouncing “two corrupt governments squandering public funds, and squelching liberty and freedom while their people suffer.”

#Russia‘s government has sent bombers halfway around the world to #Venezuela. The Russian and Venezuelan people should see this for what it is: two corrupt governments squandering public funds, and squelching liberty and freedom while their people suffer. pic.twitter.com/bCBGbGtaHT

“We have taken note of the brash tweet posted by @SecPompeo regarding the training flight of Russian strategic bombers to Venezuela,” they wrote on Twitter. “What the US Secretary of State has tweeted is completed unacceptable, not to say unprofessional.”

🔹What the US Secretary of State has tweeted is completed unacceptable, not to say unprofessionalhttps://t.co/q2V4EV0XzA pic.twitter.com/UB5FyuWjfg

Venezuelan Defence Minister Vladimir Padrino López said the exercises were part of Russia’s support for the country’s military, which he claimed was needed because the United States is planning an invasion that would lead to the overthrow of the Maduro regime.

“This we are going to do with our friends, because we have friends in the world who defend respectful, balanced relations,” he said. “We are preparing to defend Venezuela to the last inch when necessary.”

“We have spoken with representatives of Russia and have been informed that their military aircraft, which landed in Venezuela, will be leaving on Friday and going back to Russia,” Sanders said in a statement Wednesday.

The Kremlin has expanded its support for the Maduro regime, which is currently overseeing a dire economic and humanitarian crisis. Over the past decade, Vladimir Putin has been one of the most reliable backers of Maduro, providing at least $17 billion in loans and credit lines since 2006, as well as arms deals and military intelligence sharing.

Moscow negotiated repayment in the form of oil shipments, although it is struggling to meet its requirement due to the ongoing collapse of the country’s state oil company Petroleum of Venezuela.