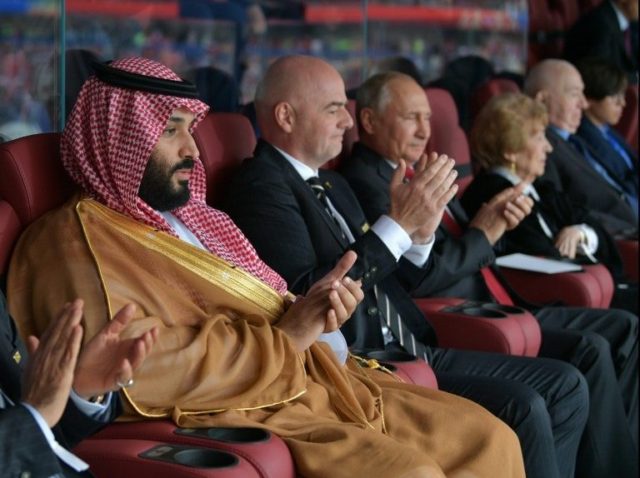 Skepticism of Saudi Arabia’s claims in the death of journalist Jamal Khashoggi has flourished around the world, but the Kremlin took pains on Friday to assure the Saudis their credibility is undamaged in Moscow.

“We’ve heard the statement from the royal family condemning this murder, about the non-participation of the royal family to this. Everything else is a matter of investigation, which the royal family itself wants. We welcome this,” Kremlin spokesman Dmitry Peskov said in a conference call on Friday.

“There is an official statement from the King, there’s also a statement from the Crown Prince. No one should have any grounds not to believe,” he added. Peskov evidently did not specify which of the conflicting statements from the Saudi monarchy should be believed.

Russian President Vladimir Putin spoke with Saudi King Salman bin Abdulaziz on Thursday in a conversation the Kremlin said the Saudi monarch initiated. The Khashoggi case was reportedly a major topic of the conversation.

King Salman reportedly confirmed an invitation for Putin to visit Saudi Arabia, an invitation that has been outstanding since Salman visited Russia in October 2017. The Kremlin confirmed the details of Putin’s visit are still being negotiated.

“So far there is no certainty about the dates of the visit, as soon as we agree on it through diplomatic channels, we will inform you. In general, preparations for the visit continue,” said Peskov.

The Russians have been keeping their options open with the Saudis, dropping unsubtle hints that if the House of Saud grows weary of hectoring from nations that frown on killing critics of the state, Moscow is always ready to provide an alliance with fewer human-rights strings attached.

“I don’t think we should meddle and pick up the pieces in the situation with the Saudi journalist,” Peskov said in an October 19 interview with Russia’s Channel One. “We hope that this situation will be solved in accordance with the law without any allegations.”

“First of all we should wait for the results of the investigation,” Putin himself said last week. “How can we, Russia, start spoiling our relations with Saudi Arabia without knowing what in fact happened there?”

CNN observed on Thursday that Russia’s strategy is “already paying off handsomely,” as Moscow recently announced a $5 billion investment by Saudi Arabia in a Russian Arctic natural gas pipeline, while the Russians moved quickly to pick up Saudi business left on the table when many industrial giants and government officials pulled out of the recent “Davos in the Desert” investment conference to protest Khashoggi’s murder.

Bloomberg News found that Saudi conference positively swarming with Russian magnates after big names across the West pulled out, their participation heartily encouraged by the Kremlin:

Russian billionaire Mikhail Gutseriev, who owns oil company Russneft PJSC, and ECN Group’s Grigory Berezkin are also considering making the trip to Riyadh. Berezkin said he had not yet received a visa.

“The Russian Direct Investment Fund together with its partners plans to actively participate in the Future Investment Initiative conference,” the sovereign wealth fund said in a statement.

“Russia is building situational coalitions with all those that the West opposes. The Saudis will play the Russian card in order to achieve a more restrained U.S. attitude,” Moscow State Institute for International Relations political scientist Valery Solovei told Bloomberg, offering a glimpse of how the Saudis could play both sides against each other and end up profiting handsomely from the political and diplomatic crisis created by Khashoggi’s murder.