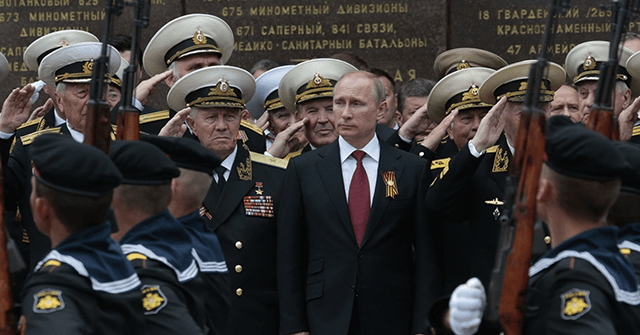 Russian Foreign Minister Sergey Lavrov extended an invitation to the country to Ukrainian President Volodymyr Zelensky on Friday, but on the condition that he not discuss the ongoing war in eastern Ukraine that Russia denies, despite widespread evidence it has a hand in.

The war in Donbas, eastern Ukraine, has resurfaced as a global concern after President Joe Biden last week told reporters at a press conference that he believed Russian leader Vladimir Putin would invade Donbas and the United States would not act in the face of a “minor incursion.” Zelensky and his administration have vocally refuted Biden’s claims and urged Ukrainians to “calm down” and disregard panic from the White House and the global media.

The Russian government has insisted, inspiring little confidence, that it has no intention of colonizing Ukraine. Putin has repeatedly referred to the fall of the Soviet Union, and severing of Ukraine from Russia, as a “tragedy,” leading many to believe that he would prefer Ukraine not to be a sovereign state.

Lavrov, during an interview on Friday, urged Ukraine to address concerns with Russia directly, rather than through intermediaries such as the United States or Western Europe.

“The Russian president has said: if Zelensky wants to discuss normalizing bilateral relations that are impaired by the unilateral actions of his regime – and we, of course, reacted to these actions – we are ready for this, no problem,” Lavrov said, according to the Russian media outlet Tass. “Let him come to Moscow, Sochi or St. Petersburg where they agree.”

Lavrov insisted, however, that the war in Donbas was off-limits.

“But if he wants to discuss Donbass, he should turn to the Contact Group, which by decision of the Normandy format should consider all the issues of settlement directly between Kiev [sic] and Donetsk, Kiev and Lugansk [sic],” Lavrov insisted.

Donetsk and Luhansk are cities in Donbas where pro-Russian separatists have declared themselves sovereign republics. These declarations triggered the ongoing war there, which began in 2014, just as Russia invaded and colonized Ukraine’s Crimean peninsula.

The “Normandy format” is a multilateral forum that brings Russia and Ukraine together to discuss the war alongside Germany and France, who play no role whatsoever in the ongoing Donbas crisis and have not made any notable strides towards piece since the Normandy format was established. Zelensky met with Putin – and then-German Chancellor Angela Merkel and French President Emmanuel Macron – in December 2019 in a meeting that clearly resulted in significant frustration for the Ukrainian leader. Zelensky referred to talking to Putin as “difficult” and lamented the talks accomplished “very little.”

Lavrov, according to Tass, insisted that the offer of dialogue with Kyiv was open only if Zelensky essentially faulted his own government for every aspect of the tensions between Russia and Ukraine.

“As for our relations, if he has something to say and [has an understanding] how to correct those steps for their destruction that were initiated by Kiev [sic] – by Zelensky and his predecessors – we are ready to consider it,” Lavrov said. “The president clearly indicated that.”

Zelensky has proposed direct talks with Russia in the past, most recently last month, and asserted that the war in Donbas cannot end without Russia acknowledging its participation in it. Moscow insists the war is a civil war between the Ukrainian state and independent separatists – who happen to use Russian-made military equipment and to whom Putin has extended Russian citizenship offers.

“We must tell the truth that we will not be able to stop the war without direct talks with Russia,” Zelensky said last month.

“The war in Donbass has been going on for eight years. Eight years since Russia annexed Crimea. And I’m not afraid to tell everyone about it and speak directly to the Russians. That’s why, at the same time, I’m not afraid to talk to them directly,” the president told parliament. “We are not afraid of direct dialogue.”

Zelensky has also previously lamented the involvement of France and Germany in the affair, suggesting that “serious” countries should serve to aid the talks, instead.

The invitation to Moscow comes as rumors swirl of tensions between Zelensky and Biden, capped by rumors that their phone call on Thursday night revealed a significant disconnect. While both the White House and the Ukrainian government have denied any difficulties, rumors fueled by anonymous reports in CNN suggested that an exasperated Zelensky urged Biden to “calm down” and refuted the latter’s insistence that the Russian government would imminently invade Kyiv. In public, both Zelensky and his government have said they see no significant difference in Russian military activity at the moment compared to this time last year and that the greater threat to Ukraine is panic leading to economic hardship, not a formal military invasion by Russia.

“These risks [of invasion] have existed for more than a year, and they haven’t increased,” Zelensky said in a speech to the public last week. “What has increased is the hype around them.”

Zelensky urged Ukrainians to “take a deep breath” and “calm down.”