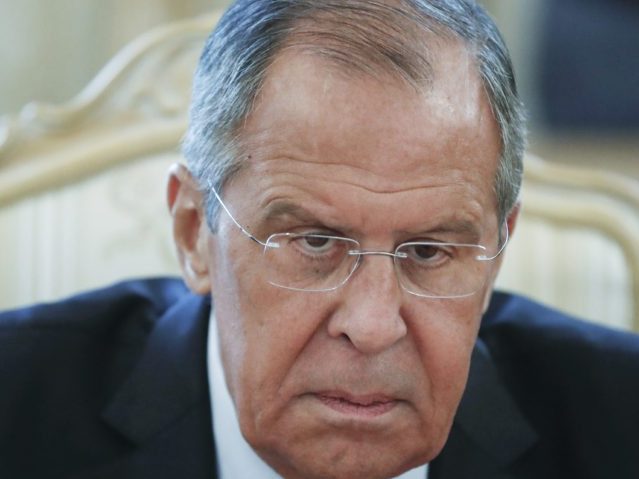 Russia strongly denounced U.S. sanctions against Venezuela’s national oil company PDVSA on Tuesday, slamming the sanctions as an illegal attempt to overthrow what Moscow views as the legitimate government.

“The legal leadership of Venezuela has already described these sanctions as illegal. We can fully join this point of view,” Kremlin spokesman Dmitry Peskov said on Tuesday.

Peskov repeated the Russian government’s general objection to the use of sanctions and lamented what he described as America’s growing reliance upon them.

“We do not consider this to be right; we consider it most often to be the manifestations of unfair competition. In this case, this is a continued line on undisguised interference in the internal affairs of Venezuela,” he said of the U.S. Treasury sanctions.

Peskov added a warning against third parties using military force to intervene in Venezuela while simultaneously dismissing criticism of possible Russian military support for the Venezuelan government, essentially arguing that Russian intervention would stabilize Venezuela while all other interference would be disruptive.

“We are concerned about what the U.S. and its closest allies are doing with respect to Venezuela, brazenly violating all imaginable norms of international law and actually openly pursuing the policy aimed at overthrowing the legitimate government in that Latin American country,” Lavrov said.

“U.S. companies operating in Venezuela are exempt from these sanctions. In other words, they wish to topple the government and derive material gains from this,” he charged.

Lavrov went on to portray Venezuelan National Assembly speaker Juan Guaido and his supporters as puppets of the United States.

“According to our sources, the leaders of the opposition movement who have declared ‘dual power’ are in fact receiving instructions from Washington not to make any concessions until the authorities agree to abdicate in some way,” he claimed.

“Together with other responsible members of the international community, we will do everything to support President Maduro’s legitimate government in upholding the Venezuelan constitution and employing methods to resolve the crisis that are within the constitutional framework,” Lavrov vowed.

The Russian foreign minister made reference to photographs of U.S. National Security Advisor John Bolton carrying a notepad that suggested the Trump administration is considering a troop deployment to Venezuela’s neighbor Colombia.

“I have read reports saying that apparently yesterday, John Bolton held a press briefing and, according to the media, was careless enough to expose some notes to journalists with TV and photo cameras. The note read ‘5,000 troops to Colombia.’ This raised some eyebrows, especially given the overt calls for using Venezuela’s neighboring countries to launch a direct intervention due to the difficult humanitarian situation in Venezuela, which can be heard from the United States and a number of other countries,” Lavrov said.

Lavrov played up divisions within the European Union, contrasting the ultimatums issued to Maduro by several European countries with the EU’s “more moderate statement” and claimed support for Russia’s position from China, India, and Iran.

“We would like to figure out what the international community could do to prevent another blatant violation of international law and violent regime change, and bring the situation back to the constitutional track,” he said.

Former Canadian ambassador to Venezuela Ben Rowswell explained to CNN on Tuesday that authoritarian states like Russia support Maduro, and oppose sanctions as an instrument of international policy, because they want to stress the primacy of rulers over their subjects.

“If Maduro is able to stay in power, it will benefit those that believe that the state should have the final say, no matter what citizens want – like Cuba, Russia and China,” said Rowswell. “If Maduro is forced out, it will help those countries that believe that final political authority should rest with citizens, like most of Latin America, Canada, and the U.S.”

Russia’s support for Maduro has its limits, however, as the Russian Finance Ministry on Tuesday made it clear that Venezuela is expected to make payments on time for its billions of dollars in Russian loans.

“No changes in the agreement have been introduced and correspondingly Venezuela must fulfill the obligations it has taken upon itself to the creditor,” the Finance Ministry stated.

Russia has another huge financial stake in Venezuela, as Russia’s Rosneft oil company owns major oil assets, including almost half of Citgo. The Russians have been using Venezuela’s debt as leverage to snap up oil fields and refineries at spectacular prices, and they helped the Maduro regime create a financial system to work around U.S. financial sanctions. When Maduro ran short on cash, the Russians traded weapons for oil. Moscow is terrified at the thought of a pro-American robust democracy taking over from Maduro and rethinking some of the financial and strategic commitments he made to Russia, setting Russian ambitions in Latin America back by decades.