The Russian government claimed on Tuesday that several military units have completed “scheduled drills” along border with Ukraine and will now return to their permanent bases, bringing their armor and artillery with them.

Russian officials taunted the Biden administration by claiming the redeployment “humiliated” Western war hysterics, while Ukrainian and NATO military officials said they did not see any immediate sign of Russian forces actually pulling back from the border.

“As combat training measures are coming to a close, the troops, as is always the case, will conduct combined marches to their permanent garrisons. Units of the Southern and Western Military Districts that have accomplished their tasks have already begun loading personnel and equipment on railway and auto transport means and will today begin heading to their military garrisons,” Konashenkov stated.

The Defense Ministry statement implied that withdrawal could take some time because some of the units would be marching home on foot, in column formations, as part of their training.

Russia’s Southern Military District made a similar announcement on Tuesday that its troops were loading their “heavy tracked armor, such as tanks, infantry fighting vehicles and self-propelled artillery guns” onto trains and preparing to return from Crimea to bases in Dagestan and North Ossetia. 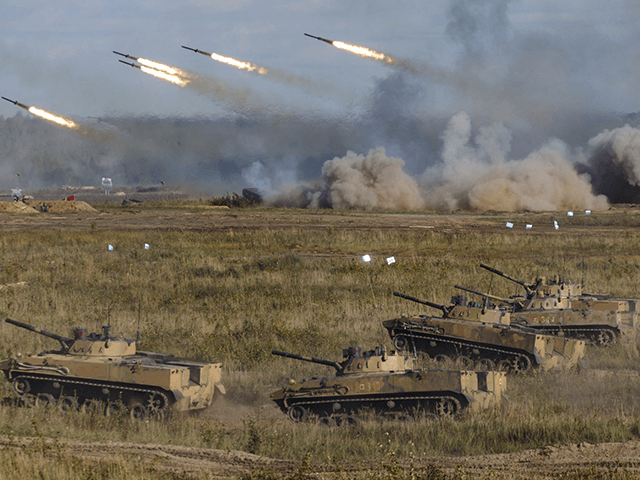 A view of the joint strategic exercise of the armed forces of the Russian Federation and the Republic of Belarus Zapad-2021 at the Mulino training ground in the Nizhny Novgorod region, Russia, Sept. 11, 2021. (Vadim Savitskiy/Russian Defense Ministry Press Service via AP, File)

“The units of the Southern Military District that have completed accomplishing their tasks as part of scheduled tactical exercises at combined arms practice ranges on the Crimean Peninsula have begun returning to their permanent bases. The personnel of battalion tactical groups have conducted marches to the areas of railway stations where operations to load combat equipment on special platforms have been organized,” the district command stated.

The Ministry of Defense said some troops and naval units are still “training” in the neighborhood of Ukraine, and would begin a fresh round of drills on Tuesday.

Russian Foreign Ministry spokeswoman Maria Zakharova said Western powers had been “humiliated and destroyed without a single shot fired” because their warnings of an imminent Russian invasion of Ukraine were ostensibly rendered foolish by the withdrawal announcement.

“15 February, 2022, will go down in history as the day Western war propaganda failed,” Zakharova declared.

“As for drills that Russia conducts on its own territory and in accordance with its own plans – let me specially emphasize that again – they begin, are implemented and concluded as planned. We have repeatedly stated that,” Lavrov said after meeting with Polish Foreign Minister Zbigniew Rau in Moscow.

“And this refers to the drills in the country’s west, similar measures in the Far East or the joint Russian-Belarusian drills that are also developing and proceeding in strict compliance with the approved schedule,” Lavrov continued.

“This is done irrespective of who thinks what, who and how is hysterical about this, who and how unleashes this genuine information terrorism and I am not afraid to use this word. The caravan keeps going,” he said. 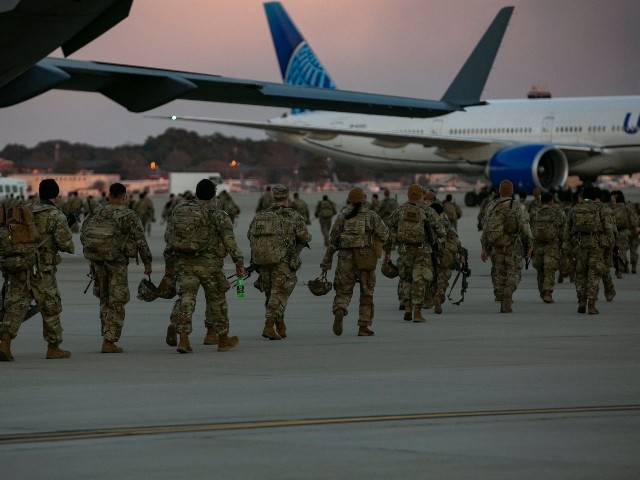 US service members based in Fort Bragg, North Carolina, are preparing deploy to Europe as the crisis between Russia and Ukraine escalates. (Photo by ALLISON JOYCE/AFP via Getty Images)

Observers from Ukraine, its Eastern European neighbors, and NATO were skeptical, noting that the latest satellite photos showed more Russian troops and equipment moving toward the Ukrainian border, not pulling away from it. The overall Russian presence on the border has been estimated at roughly 130,000 troops.

British Prime Minister Boris Johnson said “the intelligence that we’re seeing today is still not encouraging”, and Ukraine said the reported pullback needed to be seen to be believed.

“If we see a withdrawal, we will believe in a de-escalation,” Interfax Ukraine quoted Ukrainian Foreign Minister Dmytro Kuleba as saying.

NATO’s chief welcomed signals from Russia in the past two days that it may be looking for a diplomatic solution but urged Moscow to demonstrate its will to act.

British Foreign Secretary Liz Truss insisted a Russian attack on Ukraine could still be “imminent,” while France said it could not confirm any significant movement of Russian troops back to their home bases, and Polish defense consultant Konrad Muzyka said it would take days to determine if a serious drawdown of troops is truly underway.

“It should also be noted that new trains with equipment from Central Russia keep on arriving near the border and that Russian forces continue to move towards staging areas. The announcement stands in a direct opposition to what Russia has been doing for the past few days,” Muzyka said.