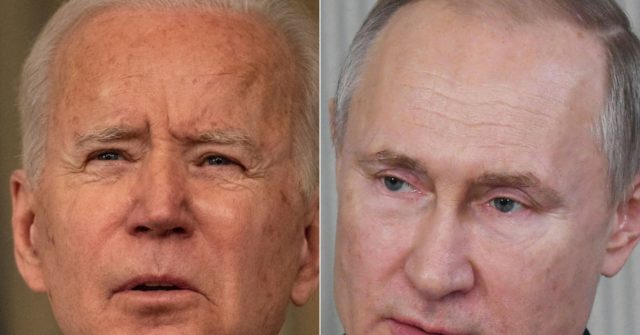 The Foreign Ministry of Russia claimed on Thursday to have “started” working on setting up a virtual debate between the country’s leader, Vladimir Putin, and American counterpart Joe Biden – an invitation Biden has not and is unlikely to accept.

Putin personally invited Biden to a “dialogue,” broadcast live on global internet platforms, in response to Biden agreeing in an interview this week that Putin can accurately be described as a “killer.” Putin insisted this debate would have to take place either on Friday or Monday as soon as possible, as he hoped to “rest” during the weekend.

Neither Biden personally nor the White House has accepted the invitation, stating only that Biden had plans to travel on Friday. This has not stopped the Foreign Ministry from unspecified planning to make the event happen.

Russian news network TASS claimed to have reached out to the Foreign Ministry on Thursday, asking if any preliminary measures are being taken to ensure that the dialogue takes place. Unnamed sources replied, “yes, we have already started.”

Kremlin spokesman Dmitry Peskov added some details on Putin’s proposal on Friday, stating that Biden’s lack of an answer on it did not mean that it could not happen and that it would most likely happen on Monday since White House Press Secretary Jen Psaki had noted that Biden had travel plans on Friday.

“This means that it [the discussion] cannot take place today. But as President Putin said, it’s either Friday or Monday, because on the weekend, Putin won’t be in very comfortable conditions to organize communication with the US president,” Peskov told reporters, “so Monday is still an option. Another option is [to hold the talks] at any time convenient for the US president.”

“You know, there are open and secure channels. There are secure video channels that can be opened to the public. Actually, Putin meant a public conversation that would be open to the people of the two countries,” Peskov added.

Peskov added that Russian diplomats are working to communicate with their American counterparts to make the discussion happen, so Moscow is engaging in behind-the-scenes overtures as well as Putin’s apparently spontaneous remarks.

Peskov did clarify that, while Russia is moving to make the talks happen, Moscow will consider no clear answer from Washington as decline to the invitation.

Putin’s request was for a public talk from their respective capitals offered few details. In extending the invitation to Biden, Putin exhibited impatience, stating it should happen as soon as possible.

“I wouldn’t put this off for too long. I want to go to the taiga on the weekend to get some rest, but we could do it tomorrow or, let’s say, on Monday,” Putin said on Russian station Rossiya-24 on Thursday. “Please, we are ready at any time convenient for the Americans, I will give the corresponding directive right now to the Ministry of Foreign Affairs [of Russia].”

The invitation was a response to remarks that Biden made during an interview broadcast this week with former Democrat Party operative George Stephanopoulos in which he threatened Putin with paying an unspecified “price” for international misdeeds.

“He will pay a price,” Biden said. “We had a long talk, he and I, when we — I know him relatively well. And the conversation started off, I said, ‘I know you and you know me. If I establish this occurred, then be prepared.’”

Stephanopoulos asked Biden if he thought of Putin as a “killer,” to which Biden responded, “I do.”

The Biden interview followed the revelation in a report published this week by the Office of the Director of National Intelligence (ODNI) that evidence suggested the Russian government had intervened in the 2020 American presidential election.

“We assess that Russian President Putin authorized, and a range of Russian government organizations conducted, influence operations aimed at denigrating President Biden’s candidacy and the Democratic Party,” the report read, “supporting former President Trump, undermining public confidence in the electoral process, and exacerbating sociopolitical divisions in the U.S. Unlike in 2016, we did not see persistent Russian cyber efforts to gain access to election infrastructure.”

The report similarly accused other rogue states, like Iran and China, of attempting to meddle in the election.

Putin’s invitation followed an initial response in which he simply told reporters, “As far as statements by my U.S. counterpart are concerned. What would I say to him in response? I would tell him: ‘Stay healthy!’ I wish him good health.”

While Putin’s response was tepid, Peskov expressed outrage in response to the interview, calling Biden’s remarks “very bad.” The Russian Foreign Ministry recalled its ambassador to Washington as well, not specifying that the interview was the reason but insisting that bilateral ties were “in a difficult state.”