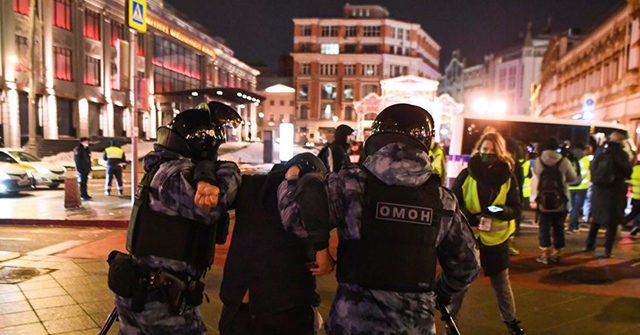 The Russian government is reportedly stocking up on riot gear this week as supporters of jailed opposition leader Alexei Navalny aspire to stage the largest protest in modern history.

Organizers said they would announce the date once they have 500,000 registered attendees.

Navalny announced Thursday he has launched a hunger strike to protest mistreatment and lack of proper medical care in the prison camp where he is presently serving a two-year sentence. He was arrested on charges of violating his probation in January when he returned to Moscow after receiving treatment in Germany for the chemical weapons attack that nearly killed him.

Navalny says his attempted assassination was carried out by the Russian FSB security service on orders from President Vladimir Putin. Prior to his arrest in Moscow, he claimed he was able to prank an FSB agent into admitting as much on a recorded telephone call.

The Russian government has deemed street protests in support of Navalny illegal, and according to Reuters on Friday, the Interior Ministry is spending big money to buy the equipment it needs to enforce that edict:

The ministry also issued tenders for the purchase of 1,625 protective kits, 200 helmets and more than 400 bulletproof vests.

The Interior Ministry did not immediately respond to a request for comment.

In February, the prison authority issued tenders for the purchase of hundreds of tasers, smoke grenades and protective gear after nationwide rallies in support of Navalny.

Deutsche Welle (DW) was skeptical that Navalny’s allies could get half a million people into the streets, citing polls that 80 percent of Russians say they have no plans to attend any protests in the near future, a number that has increased ten percent since the advent of the coronavirus pandemic last year.

Sociologist Denis Volkov told DW that Russians age 25 to 35, Navalny’s key demographic, have grown “disheartened” and have “no idea what to do, especially after the harsh way in which authorities, backed by older generations, put down protests this winter.”

“Another reason for the waning appetite for protest happens to be the lack of a suitable occasion to exploit in the media, as well as a lack of organization on the part of the Navalny organization,” added Chatham House political scientist Nikolai Petrov, who thought Russians might be saving their energy for the upcoming parliamentary elections.

Various observers told DW that recent mass Russian protests have been more about issues, such as changes to retirement pay in 2018, than individuals, the opposition is too fragmented to rally around a single figure like Navalny, many older Russians are difficult to reach with the social media organizing tactics favored by young dissidents, and Russians, in general, are too demoralized to battle police in the streets.