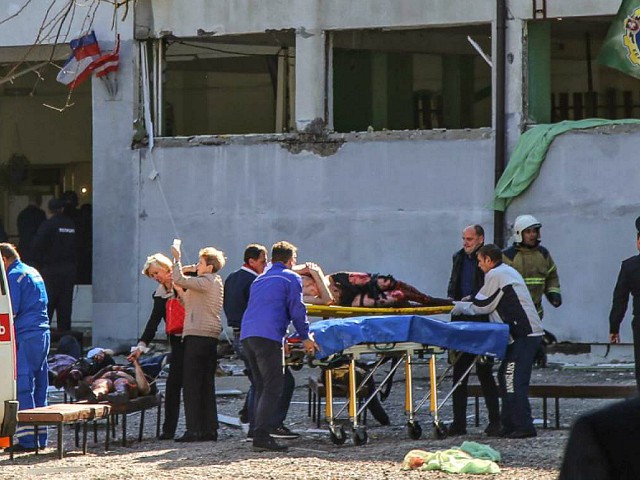 An 18-year-old allegedly massacred his fellow students with a shotgun on Wednesday at a vocational school in Crimea, the Ukrainian territory Russia annexed in 2014, killing 19 and injuring more than 50 others before committing suicide.

“He was walking around and shooting students and teachers in cold blood,” Sergei Aksyonov, the regional leader in Crimea, declared, the Associated Press (AP) reports.

Aksyonov, who described the alleged attacker, Vladislav Roslyakov, as “timid,” speculated that “some movies” may have inspired the shooter to carry out the attack.

The BBC notes, however, that the motive remains unclear.

AP describes the deadly assault as “by far the worst by a disgruntled student in Russia,” adding that “the bloodbath raised questions about school security in the country; the Kerch Polytechnic College had only a front desk with no security guards.”

“Russia has seen several violent attacks by students in recent years, but none of them were even remotely as brutal as the Kerch rampage,” AP adds.

Authorities determined that an explosive was also used in the attack, but the Investigative Committee, Russia’s top crime investigation agency, found that all the victims died of gunshot wounds.

According to some Russian news reports, the attacker had left his backpack containing the explosives in the cafeteria and remotely detonated it before he went on the rampage with the legally obtained shotgun.

“I heard an explosion and saw glass shards and window frames falling down,” student Roman Voitenko noted in remarks broadcast on Russian state television, according to AP.

There are contradictory reports about the chronology of the attack.

The alleged perpetrator, named Vladislav Roslyakov, is said to have run from room to room as he fired, starting in the area near the canteen. He then shot himself dead, Russia’s investigative committee said.

Photos later emerged in Russian media purportedly showing the body of the attacker in the college library. The investigative committee said initial examinations suggested all the victims died of gunshot wounds, but some reports speak of shrapnel injuries.

Investigators reportedly found a second explosive device among the personal possessions of the shooter that authorities ultimately disarmed.

AP points out that school shootings are rare in Russia, where gun ownership is tightly restricted.

However, BBC notes that “there have been five attacks in schools in Russia this year where a number of children were injured.”

By the end of the day, the death toll stood at 19, though it was not clear if that figure included the shooter. Fifty-three people were wounded, including 12 in serious condition, Crimean authorities said.

It was the greatest loss of life in school violence in Russia since the Beslan terrorist attack by Chechen separatists in 2004, in which 333 people were killed during a three-day siege, many of them children, and hundreds were wounded.

News outlets identified the alleged attacker Roslyakov as a fourth-year student at the Kerch Polytechnic College.

“It wasn’t clear what prompted Vladislav Roslyakov, described as a shy loner, to go on the rampage. A security camera image carried by Russian media showed him calmly walking down the stairs of the school in the Black Sea city of Kerch, the shotgun in his gloved hand,” AP notes.

During a news conference in the southern city of Sochi, where he was meeting with Egyptian President Abdel-Fattah el-Sissi, Russian President Vladimir Putin condemned the attack as a “tragic event” and offered his condolences to the victims’ families.

Reportedly, Russia heavily restricts who is allowed to own guns.

“Civilians can own only hunting rifles and smooth-bore shotguns and must undergo significant background checks,” AP points out. “Roslyakov had only recently received a permit to own a shotgun and bought 150 cartridges just a few days ago, according to local officials.”