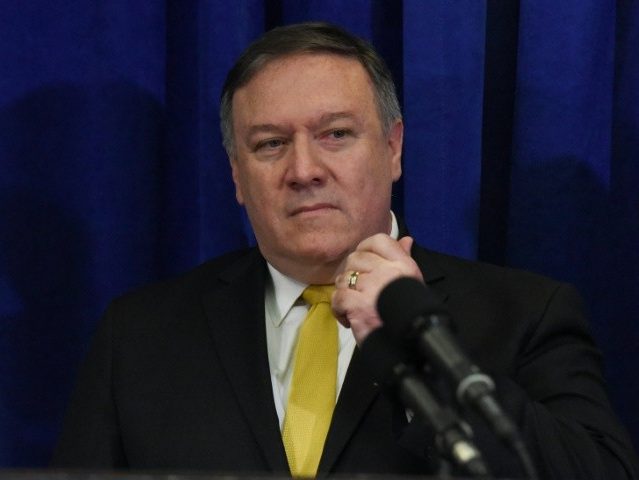 Russia and China spent this week’s U.N. General Assembly working to undermine international sanctions against North Korea’s nuclear program, to the exasperation of U.S. Secretary of State Mike Pompeo, who seeks to rally the world community and show firm resolve to North Korea at a crucial moment in the denuclearization drama.

As CNN reported on Thursday, Russia and China are trying to help North Korea play its old game of demanding rewards today for meaningless, symbolic, or easily retracted “concessions.” Pyongyang’s allies want the pressure to come off long before substantial measures are taken:

[Chinese Foreign Minister Wang Yi], after praising US engagement with North Korea and in particular the announcement that Trump will hold a second summit with Kim, suggested the Trump administration give North Korea something it has long sought: an official end to hostilities between the two countries.

“A timely declaration of an end of war … would help build basic trust, further facilitate denuclearization and put in place [conditions] for a final peace accord,” said Wang Yi.

“In China’s view, a political and wise decision must be made.”

One of the major concerns about signing a peace treaty to formally conclude the Korean War after seven decades is that North Korea would use that diplomatic achievement to weaken sanctions against it. Some proposals for cooperative projects between North and South Korea are blocked by the lack of a treaty.

Also, a peace treaty would give North Korea considerable leverage to demand the removal of U.S. forces from the Korean peninsula – perhaps a desirable outcome if done the right way, on the right timetable, but not if it’s forced before nuclear disarmament is complete.

Russian Foreign Minister Sergei Lavrov said that steps by the Democratic People’s Republic of Korea, including the dismantling of nuclear sites and a cessation in weapons and missile testing, should be followed by an easing of sanctions.

“It is unacceptable for sanctions against the DPRK to become an instrument of collective punishment,” Lavrov said, according to UN translators. “Against a backdrop of readiness of Pyongyang to cooperate … it seems inappropriate and untimely when our Western partners have imposed a course of tightening sanctions against Pyongyang.”

For his part, Secretary Pompeo highlighted sanctions violations by North Korea and its partners, including some hefty allegations leveled very carefully against Russia and China: “The United States is troubled by recent reports that member-states, including members of the Security Council, are hosting new North Korean laborers. This violates the spirit and the letter of the Security Council resolutions that we all agreed to uphold.”

North Korea traditionally counts on workers abroad as a source of hard currency. The workers are effectively sold as slave labor, since Pyongyang takes most of the proceeds, while the laborers are kept under strict control and made to live in appalling conditions.

U.N. Security Council sanctions restricted the export of North Korean labor in 2017. In August 2018, evidence of widespread Russian cheating on the ban was uncovered, with over 10,000 new North Korean workers registered in Russia.

“Enforcement of UN Security Council sanctions must continue vigorously and without fail until we realize the full, final, verified denuclearization. The members of this council must set the example on that effort, and we must all hold each other accountable,” Pompeo said at the U.N. on Thursday.

Pompeo’s pitch to the Security Council was that progress is being made, but the time is not right to lift sanctions. He praised the June summit between dictator Kim Jong-un and U.S. President Donald Trump as “the first significant diplomatic breakthrough in decades” but said Pyongyang does not yet define “denuclearization” the same way America and the Western world do.