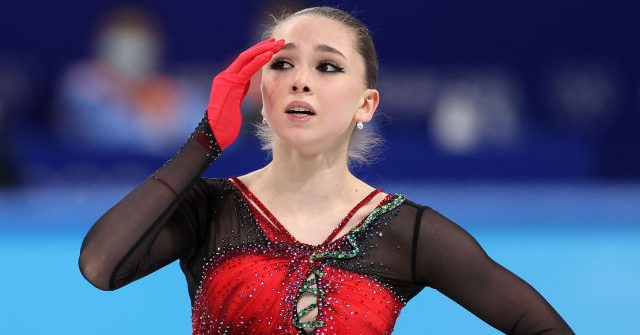 15-year-old Russian figure skating champion Kamila Valieva was allowed to continue practicing for the Beijing Winter Olympics on Thursday even though she tested positive for a banned substance.

Russia was technically banned from the Olympics after a massive state-sponsored doping scheme was busted at the 2014 Sochi games, but its athletes are permitted to compete as representatives of a bureaucratic fiction called the “Russian Olympic Committee.”

According to Russian media sources quoted by the Associated Press (AP), a sample of Valieva’s blood taken last month tested positive for trimetazidine, a metabolic agent often prescribed as a heart medication.

Trimetazidine can also be used as a performance enhancer because it increases the efficiency of the user’s circulatory system and boosts endurance. The World Anti-Doping Agency banned it on these grounds, and athletes have been banned for using it, including a Russian bobsledder named Nadezhda Sergeeva, who was disqualified from the 2018 Pyeongchang Olympics.

“What this drug does is actually make your heart work more efficiently. It doesn’t change your blood pressure very much or change your heart rate. An athlete wouldn’t get jittery or necessarily feel all that different, but they would theoretically be able to perform at a higher level for longer. It would increase their endurance, potentially,” Dr. Elizabeth Murray of the University of Rochester Medical Center explained on Thursday.

Dr. Murray, who specializes in pediatric emergency medicine, added that it would be very unusual to administer trimetazidine to someone as young as Valieva for medical reasons.

“I cannot imagine a figure skater taking this drug. It’s one big head-scratcher. I can’t imagine a scenario where she would have taken it,” Dr. Michael Joyner of the Mayo Clinic agreed.

The AP said it was “unclear whether Valieva applied for a therapeutic use exemption or has a history of heart problems.” The International Olympic Committee (IOC) and its testing agency refused to comment on the matter.

The Russian government also refused to comment and denounced everyone who is.

“As always, not knowing the essence, everyone began to yell left and right. We will not join this orderly line of screamers,” growled Kremlin spokesman Dmitry Peskov.

Valieva, until now a breakout star at the little-watched Beijing Olympics, put on a spectacular performance that helped the Russian (well, the Russian Olympic Committee) squad win a gold medal on Monday at the three-day team competition.

The medal ceremony scheduled for Tuesday was postponed as rumors of a doping scandal began to swirl. Details of the scandal were kept under wraps as long as possible, but after word leaked that the person who tested positive was a minor, observers quickly deduced it had to be Valieva – the only underage member of the six-member ROC team.

If the Russian team is disqualified due to Valieva’s drug test, the U.S. team will take the gold medal, with Japan elevated to silver and Canada to bronze.

Yahoo Sports said on Thursday the credibility of the entire scandal-plagued Beijing Olympics could be tottering on how the Valieva affair plays out.

“Really the whole credibility of the Olympic Movement and the Paralympic Movement stands teetering on the edge of us saying that we really believe and live the values that we say we stand for,” Yahoo quoted U.S. Olympic and Paralympic Committee chair Susanne Lyons observing.

“It is so important to the athletes of the world that the values of this Movement be upheld, and one of the most important values is integrity of sport. And it’s just terribly upsetting to the athletes today to have that wound potentially reopened again,” Lyons said.

Yahoo speculated Russia is working furiously behind the scenes to get a pass for Valieva on the grounds that she cannot be held responsible for taking the banned medication because she is a minor. Team Russia is counting on her to win medals in individual events, but a compromise agreement could let Russia keep its team gold at the cost of disqualifying her from the rest of the Games.