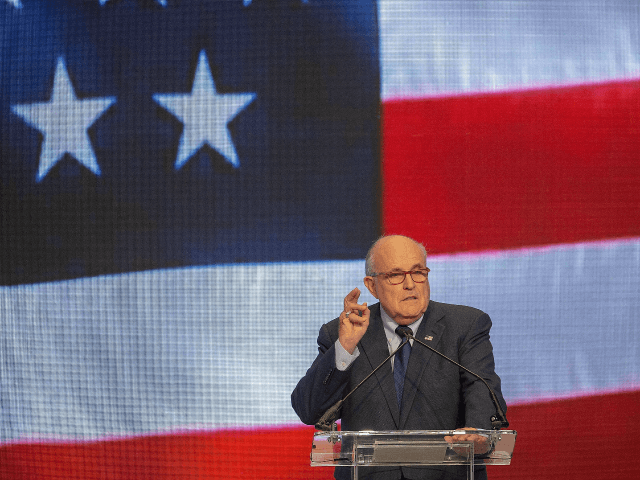 Tough U.S. sanctions on Iran are driving economic pain that could lead to a “successful revolution,” Rudy Giuliani told an expat group in New York on Saturday.

“I don’t know when we’re going to overthrow them,” President Donald Trump’s personal lawyer said,  before adding, “It could be in a few days, months, a couple of years. But it’s going to happen.”

The former Mayor of New York made his comments to attendees at the Iran Uprising Summit held by the Organisation of Iranian-American communities, which opposes the current Tehran regime.

They have gathered after Mr. Trump signed an executive order in August reimposing a series of economic sanctions on Iran that had been lifted under Barack Obama.

The president said the old Iran nuclear deal gave Iran the economic resources necessary to both continue funding terrorism around the world and searching for a path for a nuclear weapon.

“The JCPOA, a horrible, one-sided deal, failed to achieve the fundamental objective of blocking all paths to an Iranian nuclear bomb, and it threw a lifeline of cash to a murderous dictatorship that has continued to spread bloodshed, violence, and chaos,” he said.

Since then the Iran economy has crashed with international economic experts believing the current regime cannot survive.

As Breitbart Jerusalem reported, the inflation rate will reach 60 percent this year. The Iranian rial has hit a record low against the U.S. dollar amid a deterioration in the economic situation and the reimposition of sanctions by the United States. The country’s active work force is 26 million, of whom at least 10 million are estimated to be jobless.

Youth unemployment is at a staggering 40 percent. Many university graduates are unable to find a job.

Mr. Trump has previously said regime change in Iran is not the desired outcome of the sanctions. Instead he wants to see a massive change in the ruling government’s behavior.

That being so, the law of unintended consequences could still see the governing Islamic theocracy challenged by a desperate populace, according to Mr. Giuliani.

“The people of Iran obviously have now had enough,” he said on Saturday, making clear the viewpoint was his own and he was not speaking in any official capacity. “The sanctions are working. The currency is going to nothing … these are the kinds of conditions that lead to successful revolution.”