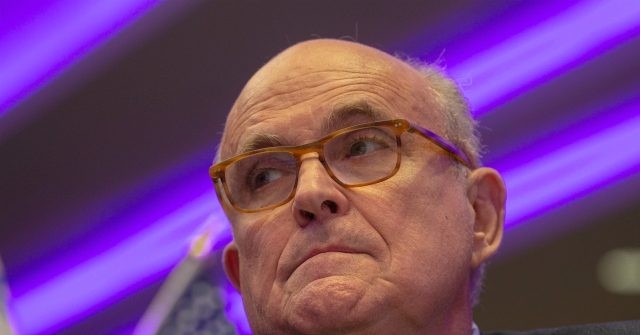 Former New York mayor Rudy Giuliani has hit out against the new Borat sequel, saying that a scene in the movie in which he appears to have an encounter with a young woman is a “complete fabrication” and is an attempt to thwart his ongoing investigation into Joe Biden and his family.

Giuliani said in a series of tweets on Wednesday that he wasn’t reaching into his pants in a sexual way during the scene, as some media report have implied, but was merely tucking in his shirt. The former mayor said that he called the police in July once he realized that the scene was a set-up.

“The Borat video is a complete fabrication. I was tucking in my shirt after taking off the recording equipment. At no time before, during, or after the interview was I ever inappropriate. If Sacha Baron Cohen implies otherwise he is a stone-cold liar,” Giuliani tweeted.

“This is an effort to blunt my relentless exposure of the criminality and depravity of Joe Biden and his entire family.”

He concluded: “We are preparing much bigger dumps off of the hard drive from hell, of which Joe Biden will be unable to defend or hide from. I have the receipts.”

As soon as I realized it was a set up I called the police, which has been noted in THR article on July 8th.

(4) We are preparing much bigger dumps off of the hard drive from hell, of which Joe Biden will be unable to defend or hide from. I have the receipts.

The clip from the Borat sequel went viral on Wednesday, reportedly showing Giuliani lying on a hotel bed, tucking in his shirt with his hand down his pants, with a young woman standing close by. Actor Sacha Baron Cohen enters the room in disguise and screams that the young woman is 15 years-old.

The Associated Press noted that the actress in question is listed as 24 years old on the Internet Movie Database site.

Rudy Giuliani was apparently under the impression that he was being interviewed by a news crew about the Trump administration before realizing that it was all a hoax.

The Borat sequel is set to begin streaming on Amazon Prime Video on Friday.