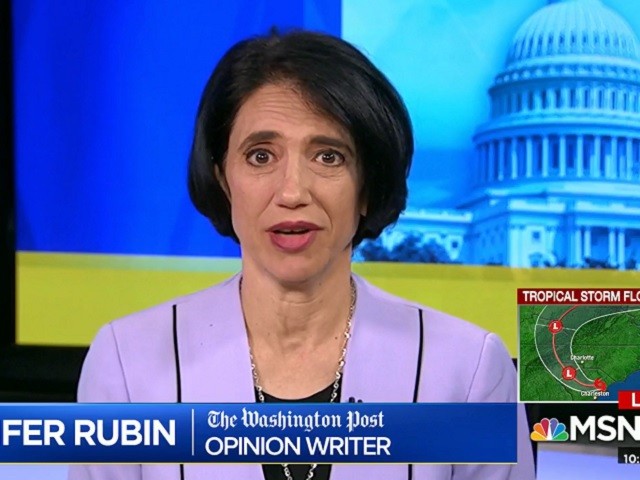 On Saturday’s broadcast of MSNBC’s “AM Joy,” Washington Post columnist and MSNBC Contributor Jennifer Rubin stated President Trump has killed the people who died from Hurricane Maria in Puerto Rico two times, once by “neglect and oversight,” and the second time by “disgracing that they died at all.” She added that the reason the response to Hurricane Florence is going well “is because those are Trump voters, just like they were in Texas. If they’re not voters, and they’re not white, he doesn’t give a darn.”

Rubin stated, “Donald Trump has killed those people twice, once through neglect and oversight, and secondly, disgracing that they died at all. And that’s what death denial, that’s what Holocaust denial, that’s what all these denial syndromes are all about, is killing the person twice. Listen, even Paul Ryan, even Paul Ryan would admit this, but what we have here is a perfect example of the different ways in which the Republicans couch and add caveats and protect Donald Trump. Paul Ryan, the first thing he said was, no one’s responsible and it’s ‘no one’s fault.’ But we don’t know it’s no one’s fault. We would like to have some oversight hearings, as Karine said. And the reason they’re doing such a bang-up job, Katon, in North Carolina and South Carolina is because those are Trump voters, just like they were in Texas. If they’re not voters, and they’re not white, he doesn’t give a darn. And that’s what this is also about, these people are not recognizable as Americans, as human beings in his eyes.”