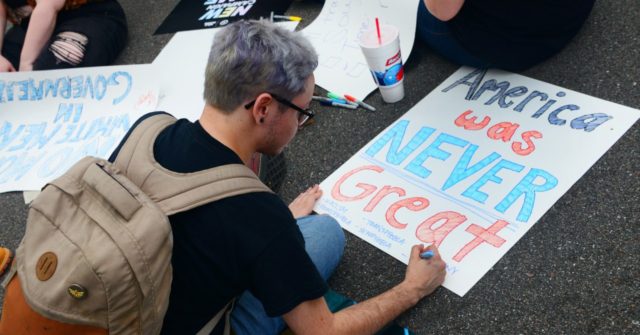 The Democrat Party has been moving noticeably farther to the left, and President Trump’s pro-America policies and “Salute to America” celebration have driven many over the edge. There are countless examples of Hollywood figures, 2020 Democrats, media outlets, and businesses revealing their true colors.

Here is a handy list of notable entities and figures that have effectively turned on celebrating America.

Just days before Independence Day, Nike decided to pull its America-themed sneakers, featuring the Betsy Ross flag. Details on the decision were scarce, but it was later discovered Nike was responding to “concerns” over the symbolism of the early flag. According to the Wall Street Journal, Colin Kaepernick reached out to Nike following its decision and said he – as well as others – viewed it as an “offensive” symbol, citing the broad era of slavery.

As many pointed out on Twitter, the “controversial” flags served as a partial backdrop during former President Barack Obama’s second inauguration.

The city of Charlottesville decided it would no longer recognize the birthday of Founding Father and author of the Declaration of Independence, Thomas Jefferson. Instead, the city council voted to replace the April 13 celebration with Liberation and Freedom Day, which recognizes the emancipation black slaves.

Last month, George Washington High School announced plans to remove an “offensive” mural of the nation’s first president, with one speaker calling it a “visual offense.”

“Many critics of the mural have condemned its depictions of slaves and Native Americans. Now, the school is on the verge of removing the mural altogether,” Breitbart News reported.

New York Times Opinion tweeted out a controversial video two days before Independence Day, which made an argument against America’s greatness and status as a Shining City on a Hill. It called U.S. greatness a myth and hit a number of common left-wing talking points, dropping sarcastic lines like, “But we have freedom in America, and everyone’s jealous, or something” and ” The truth is, how great America is really depends on how rich you are.”

The presidential candidate weighed in on the Nike controversy and noted he supported the company’s decision. Interesting, though, is the way O’Rourke phrased the controversy. Emphasis added:

“I think its really important to take into account the impression that kind of symbol would have for many of our fellow Americans, respect the decision Nike made and grateful for the conversation,” O’Rourke told reporters.

It remains unclear why O’Rourke referred to the early American flag as “that kind of symbol.”

The Harvard University professor remarked on two tanks on the Mall – there for preparation ahead of the “Salute to America” celebration – observing what he considered a “resemblance to days before Tiananmen Square.”

The resemblance to days before Tiananmen Square is chilling. https://t.co/cFJJZzL4F7

He was not the only one either. There were many tank-inspired blue-check mark freakouts.

Tanks in the streets now? Shall we review the Dictator Checklist? You’re a narcissist who likes to put his name on buildings…you appoint family members to key govt positions..your rallies are scary…you threaten to lock up political opponents..your friends are other dictators

Let this sink in:

There are tanks in the nation’s capital and concentration camps at its border.

The drift to toward the unimaginable is unmistakable.

Many college professors, in addition to Lawrence Tribe, have taken to social media to express outrage over the “Salute to America” celebration. Here is a brief sampling:

Which world dictator does this describe?

— He orders a military parade to glorify himself
— Has daughter and son-in-law to negotiate with other nations.
— Places unwanted children in cages
— Has his own propaganda TV channel
— Cozies up to other dictators

Trump’s America sure looks like a military dictatorship https://t.co/CnjnuyS2EG

Probably not the biggest gathering of white nationalists in American history but maybe a solid second place? https://t.co/caNMsKiyhY

“Watching army tanks being hauled thru DC for Trump’s July 4 celebration is heartbreaking & repugnant,” she said before peddling her alternative live stream.

Watching army tanks being hauled thru DC for Trump’s July 4 celebration is heartbreaking & repugnant. Join me via livestream tomorrow for a true celebration of who we are and what we stand for. https://t.co/esuOA4ILj0 pic.twitter.com/slgemLFNvr

The South Bend mayor appeared on CNN’s The Lead Wednesday and asserted that the big Fourth of July celebration in the nation’s capital “makes America look smaller.” He also accused the Trump administration of using the military as a prop.

“…the people who got our country started in the Revolution were skeptical of a presidency getting too much to look like a sort of imperial or royal office, and I’m afraid that’s the direction this president’s taking it in,” he added.

The left-wing filmmaker went on a tangent Wednesday, essentially calling President Trump a sociopath for desiring to celebrate and honor the U.S.

“In the face of a humanitarian crisis, that this malignant narcissist would steal taxpayer dollars to stage a partisan display of Autocracy to massage his damaged psyche is nothing short of sociopathic,” he tweeted.

In the face of a humanitarian crisis, that this malignant narcissist would steal taxpayer dollars to stage a partisan display of Autocracy to massage his damaged psyche is nothing short of sociopathic.

Author Stephen King, who is no stranger to making overreaching partisan statements, declared on Twitter that Trump’s decision to celebrate the military is a clear sign of dictatorship.

Trump’s big military parade? This is what dictators do.

Actor Josh Gad kept his critique short and wondered if “we” had lost our minds, celebrating America with such patriotic extravagance.

Not to be outdone, actress turned activist Bette Midler posted a series of tweets leading up to Independence Day, insulting Trump personally and wondering what business America has celebrating its independence while France experiences a heat wave.

An unheard of 115 degrees in France, one of our allies, and Mr Trump is only interested in putting tanks on the Mall for his salute to himself July 4th. I am so ashamed.

He’s demanding big tanks on the mall,
For his Fourth of July Big Ass Ball
He wants soldiers, firecrackers,
Flyovers and Fox yakkers
And your taxes to pay for it all!!

#Trump was bragging about his 4th of July military parade again today. Of course, doubtful he’ll march in it. Bone spurs!! Let’s call his Independence Day celebration what it really is: “The 4th of You Lie!”

She also called Trump a #FatFuck who is essentially killing Independence Day.

So that #FatFuck has hijacked our most important national holiday, Independence Day, to promote his own re-election. Like Rick Wilson says, “Everything Trump touches Dies”. Wonder what he’ll do with Thanksgiving.

Trump’s failed challenger knocked the “Salute to America” celebration Independence Day morning, reducing it to an event designed to feed what she implies is Trump’s need to “show” his patriotism.

We need a strong national defense, but a president shouldn’t need it next to him in a parade to show his patriotism.

Gregory Lee Johnson, who was, as USA Today points out, “the man at the center of the 1984 U.S. Supreme Court case that protected the burning of the U.S. flag as constitutionally protected free speech” plans to burn the American flag in D.C. on Independence Day as a form of protest.

“I am going to D.C. on the Fourth of July and I’m going to burn the flag in protest (of his) whole fascist agenda,” Johnson reportedly told USA Today.

The hashtag trended Wednesday, but it appeared to be about more than the president himself. Left-wing social media users seemingly used the hashtag to list their range of grievances against the United States.

“It’s the 4th of July but I’m not very proud to be an American today. Well, I haven’t been since election night actually,” another wrote.

“I am hoping for a monsoon with a tuch [sic] of lightning and high with gusts tomorrow,” another user tweeted, ahead of the “Salute to America” celebration.

Despite the critiques, the president remains excited to celebrate the greatness of America alongside fellow American patriots across the country.

People are coming from far and wide to join us today and tonight for what is turning out to be one of the biggest celebrations in the history of our Country, SALUTE TO AMERICA, an all day event at the Lincoln Memorial, culminating with large scale flyovers of the most modern…..

….and advanced aircraft anywhere in the World. Perhaps even Air Force One will do a low & loud sprint over the crowd. That will start at 6:00P.M., but be there early. Then, at 9:00 P.M., a great (to put it mildly) fireworks display. I will speak on behalf of our great Country!