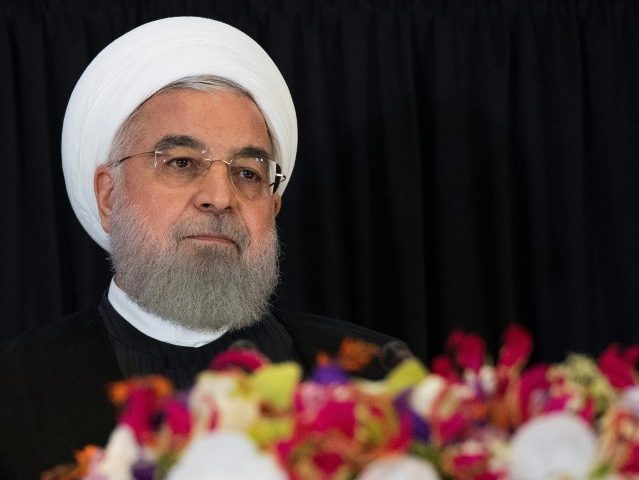 Speaking at the dedication of a shrine to Islamic Republic founder Ayatollah Ruhollah Khomeini on Wednesday, Iran’s President Hassan Rouhani said his country faces the worst economic crisis in 40 years, entirely due to U.S. policy.

“Today the country is facing the biggest pressure and economic sanctions in the past 40 years,” Rouhani said. “Today our problems are primarily because of pressure from America and its followers. And the dutiful government and Islamic system should not be blamed.”

This would seem a little out of step with Rouhani’s previous boasts that Iran’s mighty economy could easily weather the trifling impact of ineffectual American attacks, but he repeated those claims in the very same gloomy speech, insisting that Iran will prevail as long as its people support and obey their leaders.

“The United States has failed in its recent war against the Iranian nation in the political, legal, regional, international and psychological domains,” he insisted, predicting the U.S. will also “fail in its economic war against Iran when faced with the Iranian people’s resistance.”

Radio Free Europe explained why Rouhani will have a tough time selling his people on the notion that all of their woes are due to U.S. sanctions, not least being the dismal state of Iran’s economy before those sanctions went into effect:

Rohani made the comments as Iran prepares to mark on February 11 the 40th anniversary of the Islamic Revolution that brought the current, clerically dominated regime to power.

This year’s celebrations come amid growing economic hardships after the United States last year pulled out of the 2015 nuclear deal between Tehran and world powers and imposed crippling sanctions on Iran’s economy.

The value of the country’s currency, the rial, has fluctuated dramatically in recent months, making it difficult for many Iranians to make ends meet.

Meanwhile, workers including truck drivers, farmers, and merchants have launched sporadic protests that have occasionally led to confrontations with security forces.

The U.S. government on Wednesday renewed its warning to the European Union against helping Iran evade the pressure of sanctions, even as the EU prepares to create an alternative financial system that would deliver money to Iran without using the global standard SWIFT network.

Rouhani’s government is still tinkering with currency values to ameliorate the effect of U.S. sanctions. Foreign Policy on Tuesday expressed doubts that the current plan to slash four zeroes off the value of the rial will be a panacea since inflation and irresponsible government spending have long been the major factors behind Iran’s economic weakness – permanent flaws that were exacerbated by U.S. sanctions, not created by them.

On the positive side, Foreign Policy reports there appear to be signs of greater cooperation between various Iranian government agencies, fewer illusions about what redenomination can accomplish, and less resistance to the latest economic policies from the theocratic side.