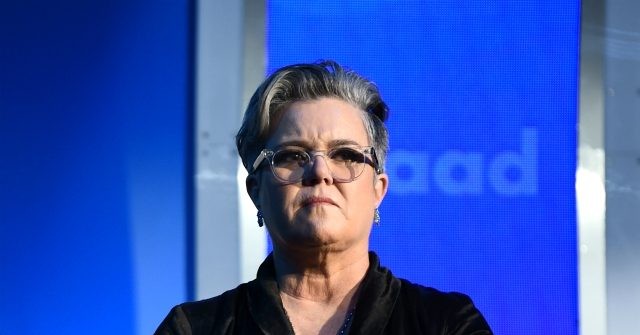 Actress and former View co-host Rosie O’Donnell announced on the 4th of July that she intends to match the money made from the sale of her artwork and donate the funds to nonprofit organizations assisting illegal aliens.

“ROSIEODONNELL2019 https://www.etsy.com/shop/ROSIEODONNELL2019 … via @Etsy – all money made will be matched by me and donated to non profits helping children in cages in trump camps,” Rosie O’Donnell said. “#NoKidsInCages.”

ROSIEODONNELL2019 https://t.co/TI58I9s4sy via @Etsy – all money made will be matched by me and donated to non profits helping children in cages in trump camps. #NoKidsInCages https://t.co/bdjNlI348Z

The Smilf star’s art is on sale on the publicly traded e-commerce site Etsy, which allows users to sale various products directly to consumers. One such piece of her art, called “resist,” has already sold.

O’Donnell has never been shy about comparing the Border Patrol-run facilities housing illegals to concentration camps.

And indeed, donating money to assist illegal border-crossers is quickly becoming a trend among the Hollywood elite.

Singer Fiona Apple announced this week that she plans to donate money earned from TV and movie royalties of her song “Criminal” to the While They Wait fund, which provides legal services to illegal immigrants.

“After months and months of reading the news about how my country is treating refugees, I’ve become gutted with frustration trying to figure out the best way to help,” the singer-songwriter said in a lengthy letter. “It seems to me that the best way I can help detainees is to contribute to payment of their legal fees.”

And Rosie O’Donnell is just one of many celebrities and Democrat politicians who’ve repeatedly called these facilities concentration camps — which for many people conjures up comparisons to the notorious death and labor camps of Nazi-occupied Europe.

But anyone who spent a few minutes mining for facts about the conditions of a Border Patrol-run holding facility would see that comparing them to concentration camps is beyond the pale.

Don’t take my (or Rosie’s) word for it. Listen and watch Chief Patrol Agent Roy Villareal’s tour of the Tuscon Sector facility he commands and see for yourself.