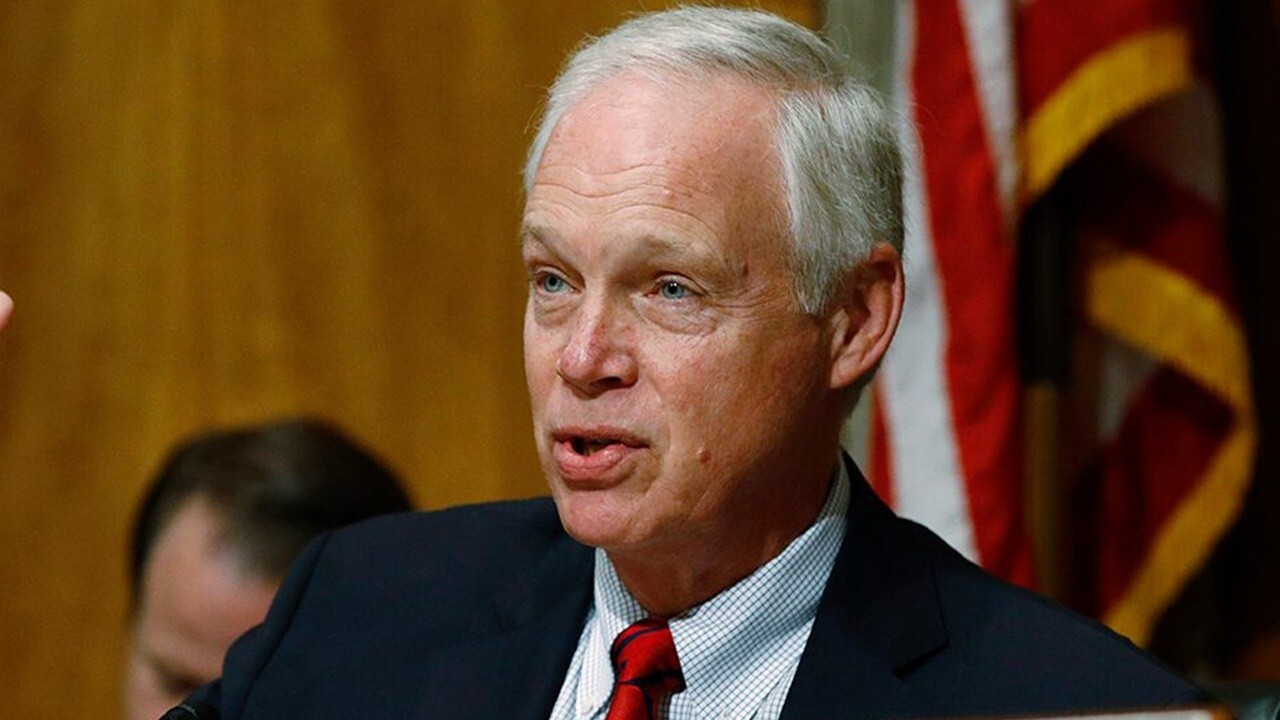 The Big Idea is a series that asks top lawmakers and figures to discuss their moonshot – what’s the one proposal, if politics and polls and even price tag were not an issue, they’d implement to change the country for the better?

Senate Homeland Security and Governmental Affairs Chairman Ron Johnson has been investigating the origins of the Trump-Russia investigation for years.

Just this summer, the committee voted to give Johnson, R-Wis., authority to subpoena more than two dozen former Obama officials individuals for documents and testimony as part of the committee’s review of the FBI’s original Russia probe, and former Special Counsel Robert Mueller’s investigation.

FBI OFFICIAL ON MUELLER TEAM SAID FLYNN PROSECUTION HAD ‘GET TRUMP’ ATTITUDE, COLLUSION PROBE WAS ‘NOT THERE’

Johnson’s committee is just one on Capitol Hill investigating the origins of the probe, also known as “Crossfire Hurricane.” The Senate Judiciary Committee, chaired by Sen. Lindsey Graham, R-S.C., is also investigating the matter.

Meanwhile, Attorney General Bill Barr appointed U.S. Attorney John Durham last year to investigate the origins of the FBI’s original Russia probe – which began in July 2016, through the appointment of Mueller in May 2017 – shortly after Mueller completed his years-long investigation into whether Trump’s campaign colluded or coordinated with the Russians to influence the 2016 presidential election.

Mueller’s investigation yielded no evidence of criminal conspiracy or coordination between the Trump campaign and Russian officials during the 2016 election, though the question of whether Trump obstructed justice was left open in the final report.

When asked whether he would continue investigating the matter even after Durham’s investigation was complete, Johnson vowed to “accept his results and judgment” but would continue to investigate until they have “uncovered the truth.”

Johnson discussed his investigation in detail with Fox News:

Sen. Johnson, you’ve been asking questions and investigating the origins of the Trump-Russia probe for years. What do you need to get to the bottom of this?

My investigations into corruption within the Obama administration began in March 2015 when the public learned Secretary of State Hillary Clinton had been using a private server to conduct official business, violating federal records policy and potentially putting our national security at risk. We uncovered and made public the edits made to James Comey’s July 2016 exoneration memo that downplayed the seriousness of her actions. Some of the same top FBI officials involved in those exonerating edits and the FBI’s investigation of the Clinton email scandal then moved on to investigate individuals involved in the Trump campaign. This investigation turned the awesome intelligence and law enforcement powers of the federal government on a presidential candidate of the opposing party to the current president, and seems unprecedented in U.S. history. The potential for abuse is mind-boggling and, based on what we already know, the abuse of and corruption within the agencies and of the presidential transition was significant. Our investigations are intended to discover and reveal the full truth of what happened to hopefully ensure that this never happens again.

What do you think is the most important thing for the American people to know about this investigation? First at the FBI and then within former Special Counsel Robert Mueller’s office?

That even though DOJ IG Horowitz concluded that the low standard for predicating an investigation had been met, the investigation should have been closed in January 2017 and a special counsel NEVER should have been appointed. The FBI found nothing but exculpatory evidence, and yet that just became an excuse to investigate the Trump campaign even more aggressively. The Steele dossier is what actually fueled and kept the investigation going – and the Steele dossier contained Russian disinformation bought and paid for by the DNC and Clinton campaign. We now know the FBI knew as early as October 2016 that the sub-source for the Steele dossier was suspected of being a Russian agent, and that in December 2016 the Crossfire Hurricane team learned that the FBI had investigated the primary sub-source in 2009 as a potential Russian agent. By January 2017, the FBI had interviewed the primary sub-source, found out that the information he provided to Steele was unreliable, and also received intelligence reporting that Steele was providing Russian disinformation. And yet, the FBI continued to use the Steele dossier as the crucial piece of evidence to obtain four FISA warrants against Carter Page, and even told the Senate Intelligence Committee in March 2018 they considered the dossier to be reliable information.

A close second is that IG Horowitz found substantial evidence of political bias against President Trump and in favor of Hillary Clinton. Democrats like to focus on the absence of explicit evidence that this bias affected specific decision making. But they ignore IG Horowitz’s conclusion, that he could find no “satisfactory explanation” for why “hand-picked teams on one of the most sensitive FBI investigations that was briefed to the highest levels” made “so many basic and fundamental errors.” To me, the answer is obvious – political bias.

SOURCE OF STEELE DOSSIER WAS INVESTIGATED BY FBI FOR RUSSIAN CONTACTS, BARR SAYS

Are Trump administration agencies – like the FBI and others in the intelligence community – cooperating with your requests for documents and testimony?

I would call the cooperation of the primary agencies we are working with to be token cooperation at best. A few agencies, GSA, National Archives and ODNI, have made good faith efforts. But the FBI is slow-walking responses to the committee’s subpoena and the CIA and State Department have not been responsive to my information requests. This all appears to be an attempt to run out the clock. Because criminal investigations take precedence over congressional oversight, Crossfire Hurricane, the special counsel, impeachment, and now the Durham, Jensen and Bash probes have provided convenient excuses to slow-walk or withhold documents. Without documents, it is impossible to conduct thorough interviews and obtain complete testimony. Unfortunately, the agency’s stall tactics have been working well for almost four years.

U.S. Attorney John Durham was appointed by Attorney General Bill Barr last year to conduct an independent investigation into the origins of the Trump-Russia probe, through the appointment of Mueller. When Durham’s investigation is complete, will you end your investigation?

The answer to that question completely depends on what actions Durham takes and what information he reports. The goal of a criminal investigation is to determine if a crime has been committed and then prosecute the perpetrators. The goal of congressional oversight is to gather information for the purpose of informing public policy and informing the American public. Generally, if a prosecutor does not indict, the investigation is closed and information – including who was being investigated – is not made public. That would not be a satisfactory outcome in this case. In addition, we are being told documents are being withheld at the request of Durham, so we may not even see some key pieces of evidence until Durham’s investigation concludes.

Will you accept the results of the Durham investigation, should it not bear indictments and findings that Republican lawmakers are anticipating and expect?

Everything I’ve read and been told about John Durham is he is a man of integrity. I fully expect to accept his results and judgment, but as indicated in the previous answer, that will not necessarily bring our investigations to a conclusion. The American people have a right to know the full truth about what happened during Crossfire Hurricane. With that in mind, I completely disagree with those who say Durham will be interfering in the election if he takes action or releases his findings before Nov. 3. I would argue the greater election interference would be withholding relevant information that voters have the right to know before they cast their ballot.

Do you plan to subpoena former Obama officials to testify before your committee? If so, who are the first you plan to compel? And when?

I have authority to subpoena 40 individuals for documents and testimony. Generally, we try to get witnesses to cooperate without having to issue a subpoena, but that does not always work. Former State Department official Jonathan Winer was the first individual that we were forced to subpoena. The ranking member on my committee, Sen. Gary Peters, used an absurd interpretation of our rules and advised Mr. Winer that he did not have to show up for his scheduled interview. We have remedied that interference, and plan to interview Mr. Winer soon. It is reported that Mr. Winer played a key role in disseminating the Steele dossier to officials within the State Department, which then relayed it to the FBI. He was also one of only two witnesses who refused to cooperate with the DOJ Inspector General’s review. As Sen. Grassley and I also noted in our September 2019 letter, Mr. Winer used his personal email to conduct official government business, and now the Senate Select Committee on Intelligence revealed that Mr. Winer admitted to destroying not only all of his correspondence with Christopher Steele, but also “essentially every email” from his tenure at the State Department. We will continue to interview and, as necessary, subpoena individuals with knowledge of corruption until we have uncovered the truth.

Is there any other information or technique that you can utilize to determine the truth?

Because news stories carrying the false narrative of Russian collusion with the Trump campaign were based on leaks from “well placed” individuals inside federal agencies, I asked my staff to do an analysis based on public reporting. The results were revealing. On July 2, 2017, we released a report identifying 125 leaks in the first 126 days of the Trump administration. As FBI Special Agent Peter Strzok infamously described it at the time, “Our sisters have begun leaking like mad. Scorned and worried and political, they’re kicking in to overdrive.” I fully support a free press and value the investigatory endeavors it undertakes. Uncovering corruption relies on whistleblowers and sources that need to be protected – when the information is true and accurate. But in the case of the false Russian collusion narrative, those sources provided false information, and I believe the media has an obligation to let the American people know who leaked this false information that threw our political system into turmoil for the last four years. I am calling on the press to come clean on what they know about who fueled this false narrative.