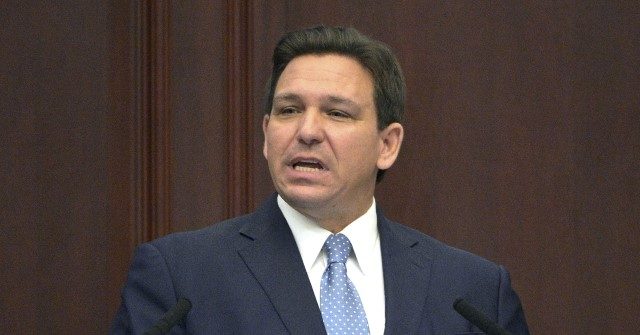 Speaking at the park, where he announced additional infrastructure projects across the Sunshine State, DeSantis weighed in on the inflationary policies embraced by the Biden administration while criticizing the left’s massive spending bills.

DeSantis said if he were in Congress, he would not have supported Biden’s trillion-dollar stimulus, particularly over fears of inflation, but he made it clear if the feds are giving money to states, he is “going to fight for Florida’s fair share of that.”

“I mean, we’re all federal taxpayers,” he said, noting that in 2020, Florida had more adjusted gross income moving into the state than any other state, he believes, in the history of the country.

“They’re spending $15 billion on speed cameras to be able to catch people speeding. I mean, I’m sorry. I don’t want that. That’s bringing us even more surveillance. Like we need more surveillance in our society right now,” the governor quipped.

“There’s trees they’re putting in. They’re saying that highways are racially discriminatory. I don’t know how a road can be that, but you know, this is the wokeification of federal policy when you see this stuff,” DeSantis said. “So there’s a whole host of problems with it, and I think the Republicans who opposed it were right.”

“However, once you’re doing it, if you’re going to fund the Everglades, then fund the EAA Reservoir. Yeah, we’re going to fight for that 100 percent because Florida taxpayers are on the hook for that, and of course my kids and your kids and some of your grandkids are going to be on the hook for the exorbitant bills that are being brought in Washington, DC,” he said, adding, “Do good policy. Don’t do inflationary policy, and Florida will be fine.”