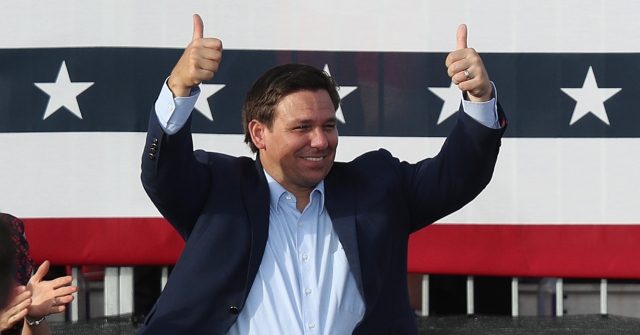 Florida Gov. Ron DeSantis (R) expressed support for the Canadian freedom truckers on Tuesday, posting an image to his Facebook page with the words, “Truck Yeah.”

The social media post garnered praise from commenters, who offered their words of support as well with messages of “Go, Truckers, go!!” and “GOD BLESS THEM ALL.”

A GoFundMe page for the convoy raised over $9.6 million. Photos and videos of Sunday’s event show massive support from citizens who took to the streets, braving the chilly weather to show their support:

Mask mandates are useless in Canada’s capital, Ottawa. Hotels and malls are allowing people to be maskless. In my hotel alone, there are hundreds of maskless people like myself. And the staff are respectful and don’t even bother asking anyone to wear one.

Yet, Trudeau, who labeled the truckers a ”fringe minority” with “unacceptable views,” announced ahead of time he would be isolating at home at the time of the protests, attributing it to exposure to the coronavirus. The triple-vaxed leader has since tested positive for the virus.

He responded to the truckers, however, during a remote press conference, asserting that getting vaccinated and “being there for each other” essentially “defines what being a Canadian is.”

“The protesters are talking about freedom,” Trudeau said. “Well, Canadians know that freedom means getting back to the things that they used to enjoy, and the way to be able to do that is to get vaccinated. The way that we built this country was by being there for each other. That’s what defines what being Canadian is.”

“So while this fringe minority is protesting, the vast majority of Canadians are thinking, ‘Come on.’ It’s by continuing to be there for each other that we will get through this pandemic,” he continued.

“We all want to be done with this pandemic, but the vast majority of Canadians know very well the way out is not protesting the pandemic, it’s getting vaccinated,” he added.

That “fringe” sect, however, reportedly raised more than money “raised by major federal political players of Canada during the closing months of 2021, public records with Elections Canada showed.”

Former President Trump has also offered his support to the truckers, telling a crowd in Conroe, Texas, the Canadian truckers “who are resisting bravely these lawless mandates are doing more to defend American freedom than our own leaders by far”:

Trump: “The Canadian truckers, you’ve been reading about it. Who are resisting bravely these lawless mandates are doing more to defend American freedom than our own leaders by far, and we want those great Canadian truckers to know that we are with them all the way.” pic.twitter.com/DPAfraVHjd