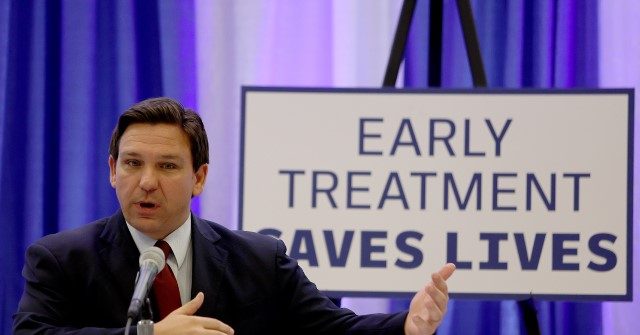 Florida Gov. Ron DeSantis (R), hosting a roundtable discussion at a monoclonal antibody treatment site in Miami that was forced to close due to the Biden administration’s actions, explained why the administration’s decision to prohibit the treatments was “fundamentally wrong,” concluding that “this is a lesson as to why you should not have the government controlling medicine in this country.”

“What they could have said is anyone who’s got appointments for the next five days can be honored or maybe they could say two weeks from now,” DeSantis said of the decision of U.S. federal health regulators, which resulted in thousands of Floridians having their appoints canceled “abruptly without notice.”

I still wouldn’t have liked that. But man, to leave people hanging the way they have — it’s really, really problematic. So we’re very much opposed to the way — particularly the [way] thousands of Floridians who were in the system waiting to get treatment — for them to wake up to an email saying that these treatments are now prohibited and tough luck, go take an aspirin. That’s just fundamentally wrong. That is not the way you treat people in this country.

DeSantis called the administration’s decision “rash” and “not keeping with the way you do clinical data.”

The decision, he said, was based on data — which was not even from a clinical study — suggesting treatments are not effective against the omicron variant. But DeSantis noted the absurdity of that position, as they know the treatments are “great” against the delta variant, prompting him to ask why officials would take treatment out of play for other variants, which are not “100 percent done.”

“You have no way of knowing exactly, you know, what percentage is delta, and the CDC has been wrong about that,” he said, noting their modeling “is not necessarily something you’d hang your hat on.”

DeSantis said the treatment should be an option for people, particularly high-risk patients, as you do not necessarily know the strain with the initial positive test and onset of symptoms. “So that alone” makes the decision to prohibit the treatment questionable, the Republican governor added, noting that the study was not even a clinical trial done on humans. Officials should have instead presented the lab study and let doctors and patients make the decision, he said.

“This is a lesson as to why you should not have the government controlling medicine in this country,” DeSantis added.