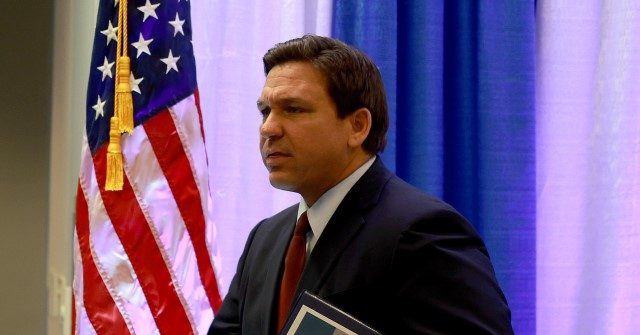 Gov. Ron DeSantis (R) on Friday said he does not necessarily support penalizing school districts who defied the state’s ban on mandatory masking in schools, but suggested that parents should have the right to sue if their children have any negative effects from the forced masking policy.

Speaking from Jackson County, DeSantis weighed in on the chatter over state legislation which could result in 12 school districts losing a collective $200 million for originally disregarding the state’s action against forced masking in schools over parental objections.

“It was in litigation. We won all that and we had the legislature come in and finally put the kibosh on all of that,” the governor said. However, he said the proposed legislation may not be the best route to go, given that it could wrongly penalize students and teachers.

He explained his reasoning:

My view on that is, rather than take money that may penalize a teacher or student because of the actions of some union-controlled school board member, my view would be let’s not do that. But what you could do is say, any parent whose kid was illegally force-masked this year in Florida, any of those districts, they should have the right to sue if their kids have any negative effects of it.

“They flouted the law, and they should be liable for the consequences of their actions. And so if the legislature goes down that route, I think that would be very beneficial,” DeSantis said, contending it would “strike a good balance” between “penalizing the politicians who flouted the law but also not doing” it in a way “that’s ham-handed and could deprive some innocent school kid of the ability to participate in a certain program.”

This week, DeSantis blasted the hypocrisy of politicians who continue to advocate for masking in school yet exempt themselves from such standards:

You know they want all these kids force-masked in school which we don’t allow in Florida but, and then they’ll take pictures of all these poor kids suffering. They’re just beaming and smiling with no mask on. I mean, it’s just unbelievable what you’re seeing across but that’s the thing.

“These policies are just about control. They want to do certain things to control the Americans,” he added.