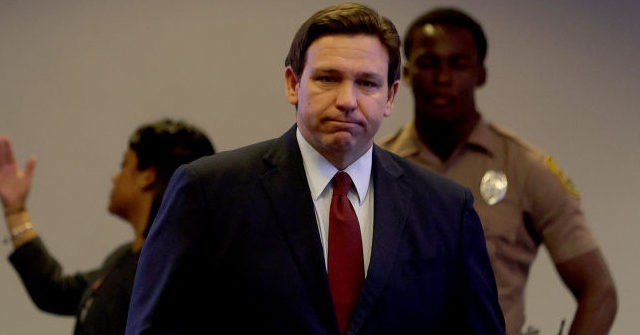 Gov. Ron DeSantis (R) on Tuesday suggested that a Workers’ Bill of Rights may be necessary to alleviate workers from mask mandates continually imposed upon them by their employers.

Speaking on Florida’s record-breaking domestic tourism numbers during a press conference in Fort Walton Beach, DeSantis talked about the restaurant industry in the state and the uphill battle the industry has faced throughout the Chinese coronavirus pandemic.

Many restaurants in other states went out of business due to extended lockdowns and restrictions, the governor said, noting that you “have to have a shot record to even be able to sit down in some of these places.”

“It’s totally bizarre. Here in Florida, they’ve been able to do very well, and I think actually a lot of restaurants have never done better than they’ve done over the last year or so,” he said.

However, he said some of these resorts and restaurants are still forcing their employees to wear masks, which he totally disagrees with. As an example, the governor explained how he would speak at a dinner event with 500 people in attendance — none of whom are wearing masks — but he noticed that members of the waitstaff were forced to wear a face-covering while serving those in attendance.

“And I’m thinking to myself, ok why? What does that do? If they want to do it for themselves then fine. I think people should have that freedom. But in many cases they’re being forced to do it by the properties. And so I’d hate to say — maybe we need like a Workers’ Bill of Rights on some of this stuff just to let people breathe freely when they’re working,” he said, adding that he believes the forced masking is nothing more than “theater.”

“I don’t think it’s really serving a purpose. Not when you have 500 other people … and you’re going to impose this on 12 people who are working hard to serve? So I really hope we can just get beyond that. I think many restaurants have gotten beyond it I think some hotels have, but I tell you. I’ve been to some places and they’re very appreciative of being in Florida that they’re able to work,” DeSantis continued, noting that he will often ask the employees when their employer will “liberate” them from the mask.

“And they’re all like, ‘We don’t know,’ but they’re all waiting for it,” he said before delivering a pointed message to the big companies running hotels and resorts: “Liberate your employees from forced masking requirements.”