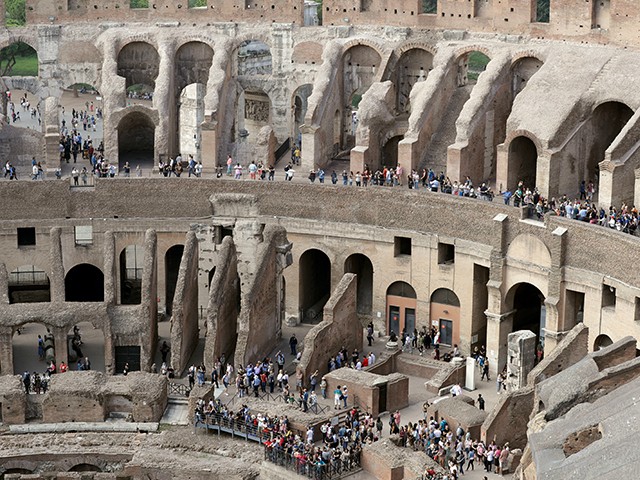 The Roman Colosseum set a new record for visitors in 2018 as Italian counter-terrorism forces have sent a convincing message that citizens and tourists will be protected and have nothing to fear.

Over 7.6 million people visited Rome’s iconic Flavian Amphitheater, or Colosseum, during the course of the year, according to Italy’s Ministry of Cultural Heritage and Activities, an increase of 7.4 percent over 2017.

An average of some 21 thousand people visited the landmark each day with a peak attendance recorded during the months of March and June, the ministry noted.

Italy has stood out among the nations of the European Union for its successful efforts to prevent terrorist attacks, earning it the title of a “model” of counter-terrorism for other countries to follow.

Over the last several years, France, Belgium, Germany, and the UK have been struck repeatedly by deadly acts of Islamic terror, while Italy has remained relatively unscathed, with not a single death by a jihadist on Italian soil.

This remarkable record has come about despite the stated wish of Muslim extremists to attack Italy. In its propaganda literature, the Islamic State has declared open war on Rome and the Vatican, declaring its intentions to destroy the capital of Christianity.

In one of its videos titled “Meeting at Dabiq,” the Islamic State depicted its vision of the end of the world culminating in an epic battle in Rome between Islam and the West. The film showed Islamist militants marching toward the Roman Colosseum and foretold of a final battle for world domination to be fought in Rome between Islamists and western “crusaders.”

In a 2017 report, the Guardian asked: “Why has Italy been spared mass terror attacks in recent years?” In its response, the UK daily proposed that one factor was Italy’s relatively small Muslim population as compared with other European nations.

“The main difference is Italy doesn’t have a big population of second-generation immigrants that have been radicalised or could potentially be radicalised,” said Francesca Galli, an assistant professor at Maastricht University and an expert in counter-terrorism policies.

Italy’s Muslim population is about half that of France, both as a percentage of its overall population and in absolute terms, according to the Pew Research Center. The percentage of Muslims living in Italy is also substantially lower than it is Germany, Belgium, or Great Britain.

A smaller population means that ghettoized areas that have become seedbeds of Islamic terror in Paris’ St. Denis area or the Molenbeek district of Brussels simply don’t exist in Italy.

Italy has also adopted more aggressive counter-terror policies, including a greater willingness to profile potential terrorists and to immediately deport foreigners who pose a terror threat.

Italy’s interior ministry boasted in 2017 that counter-terrorism units had stopped and questioned 160,593 people between March 2016 to March 2017, as well as interrogating some 34,000 people at airports and arresting around 550 suspected terrorists. They also shut down more than 500 websites while monitoring nearly half a million more.

The decree, which received unanimous approval in the Italian cabinet, combines aspects of migration policy along with other security provisions to tackle far-left occupier activists as well as the Italian mafia.