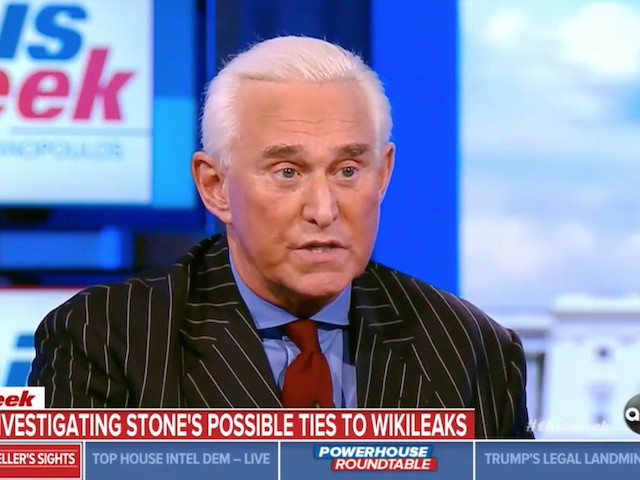 Sunday on ABC’s “This Week,” political consultant Roger Stone said he had no discussions with Wikileaks founder Julian Assange about the emails released during the 2016 presidential campaign of Donald Trump.

He also said has not spoken to special counsel Robert Mueller about his Russia investigation and insisted he has had no discussions with President Donald Trump about pardons.

STEPHANOPOULOS: Roger Stone is here with us right now, welcome to “This Week”. It does appear that – that Robert Mueller is developing a case that you are a key part of this whole Russia investigation. Russia funnels the hacked emails to WikiLeaks, you’re the conduit between WikiLeaks and the Trump campaign. Are you still confident you won’t be indicted?

STONE: Well none of that is true, of course, and there’s no evidence to support that supposition. It is now two years in, $30 million. I think few Americans could withstand the kind of legal proctological examination that Mr. Mueller has put me under. According to the New York Times, I was under surveillance by the Obama administration in 2016. They wrote that on January 20, 2017. And today there is still no evidence whatsoever of Russian collusion between the Russian state and the Trump campaign involving WikiLeaks or not involving WikiLeaks.

STEPHANOPOULOS: You say no evidence, but I want to just put up — we know that Mueller has talked to about a dozen of your associates. We know he’s asked President Trump about your contacts. And we want to share some of the evidence that has just come out and then have you respond to it.

It’s July 25, 2016, email from you to Jerome Corsi where you say “get to Assange at the Ecuadorian embassy in London and get the pending WikiLeaks email.” You have another July 31st email to Corsi where you talk about a British man named Ted Malloch. You say “Malloch,” you tell him “should go see Assange.”

Corsi emails back to you on August 2, “word is our friend in the embassy,” that must be Assange, “plans two more dumps, one shortly after I’m back, second in October, impact planned to be very damaging.”

You had another email to another associate of yours, Sam Nunberg, on August 4, “I dined with my new pal, Julian Assange, last night.”

And then August 8, you actually said this to a group of Republicans down in Florida.

STONE: I actually have a — communicated with Assange. I believe the next tranche of his documents pertain to the Clinton Foundation.

STEPHANOPOULOS: But now you say you never communicated with Assange at all despite all of that documentary…

STONE: Well, first of all, let’s take them backwards, I clarified that last one a dozen times. I identified that I had a source, a progressive New York City radio host, who told me in late July that whatever WikiLeaks had, whatever Assange had alluded to quite openly on CNN in June and again on Fox in August was devastating, was a bombshell, and that it would come in October.

I identified that source. I was ridiculed in the media repeatedly. Last week I produced text messages that proved indisputably that he was my source and that his source was a woman attorney working for WikiLeaks.

You won’t find that in The New York Times, or The Washington Post, or The Wall Street Journal.

Let’s go back to those emails, because I think they’re mischaracterized and they need some context.

The same day I got an email that was forwarded to me from James Rosen of Fox News saying that he had had a tip that the WikiLeaks disclosures pertained to the Clinton Foundation. Yes, I contacted Jerry Corsi because, at some point, Ted Malloch, who I had met once, had dropped Assange’s name. And like every politico in America, like every political reporter, I was interested in knowing what exactly they had.

But there was no response to that.

I mean, if I send you an email saying, George, let’s — you should rob a bank, but you don’t rob a bank…

STONE: That is absolutely correct. I turned over one direct message to the House Intelligence Committee between the flak for WikiLeaks and I, in which he essentially brushed me off. That immediately leaked to Atlantic magazine who then edited the context and published it.

No, I had no contact with Assange. Assange himself has said ‘Roger Stone is a brilliant spin master, we have had no communication with him whatsoever.’

STONE: That’s all speculation, George, there is no such evidence. And in fact going back to the email, I think those have been mischaracterized, saying that these dumps are coming turns out to be completely incorrect. They don’t come in early August as predicted by Mr. Corsi.

And there’s no reference in that email to John Podesta’s emails either. It simply says Podesta will be exposed to the American people, whatever that means. It’s not as if those things had not been widely published in early August.

STEPHANOPOULOS: Have you had any contact with Robert Mueller or his prosecutors?

STONE: We have not.

STEPHANOPOULOS: None at all?

STONE: That is correct.

STEPHANOPOULOS: Doesn’t that suggest to you that you actually are a target? Usually they speak to the witnesses first?

STONE: Well, it suggests nothing at all. Again, where is the crime? I engaged in politics. My purpose was to take a tip, which I thought to be solid, and then, after that, to follow the WikiLeaks Twitter feed and sent a Google News alert for Julian Assange and use Twitter to hype as much voter and media attention to the disclosures when they came as politics.

You were in this business once, that’s called politics.

STEPHANOPOULOS: You’re proud of your work as a dirty trickster. Did you do any dirty tricks during the Trump campaign?

STONE: The characterization of me as a dirty trickster comes from Democrats. It will probably be on my epitaph.

STEPHANOPOULOS: It’s self-proclaimed. You’ve bragged about it as well.

STONE: Actually – find me the quote where I’ve self-proclaimed it. It kind of goes with the territory at this point. But I’ve never done anything in politics that was outside the norms of my colleagues and my contemporaries. And I’ve always made it clear that so-called dirty tricks but do not cross the line into illegality.

STEPHANOPOULOS: Did anyone in the Trump campaign cross the line?

STONE: Not that I’m aware of. Again, I still – I see some confusion in the public between low-key Russian meddling – ineffective, $100,000 worth of poorly written Facebook ads, and Russian collusion between the Trump campaign and the Russian state, which to this day there is no evidence of and no proof of.

STEPHANOPOULOS: You say you’re always going to be loyal to President Trump. If you’re indicted or convicted, do you expect that he’ll pardon you?

STONE: First of all, generally speaking in politics, you avoid hypothetical questions. That said, there’s no circumstance under which I would testify against the president because I’d have to bear false witness against him. I’d have to make things up and I’m not going to do that. I’ve had no discussion regarding a pardon. The only person I’d push for a pardon for is Marcus Garvey, who I think should be pardoned posthumously and I wrote the president about that.

STONE: I’ve had no such discussions.

STEPHANOPOULOS: And he says it’s not on the table right now, any pardon of Paul Manafort. You’ve had no discussions with the president, with anyone in his team about any of this?

STONE: That is correct.

STEPHANOPOULOS: Roger Stone, thanks for your time this morning.

STEPHANOPOULOS: Up next, the top Democrat in the House Intelligence Committee, Adam Schiff, is going to weigh in.