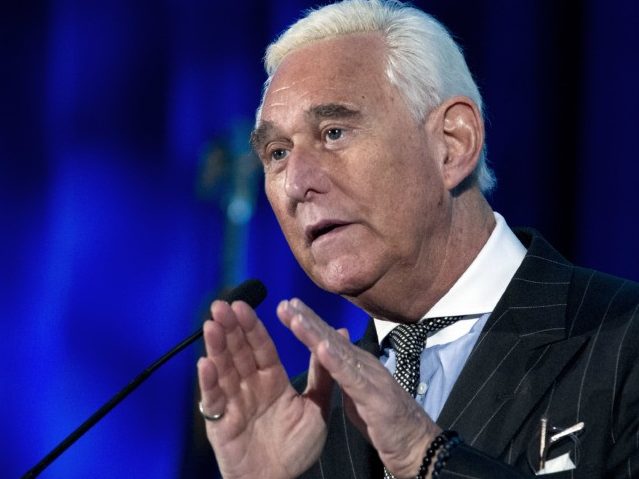 Roger Stone told Breitbart News that CNN coordinated with the “Mueller investigation” in producing “great footage” depicting him as “some sort of criminal” in order to “taint the jury pool.” He offered his remarks in a Tuesday interview on SiriusXM’s Breitbart News Daily with host Alex Marlow.

Stone recalled last Friday’s events when he was arrested by FBI agents at his home in Fort Lauderdale, Florida, with a CNN production team in tow.

Stone said, “[FBI agents] walked me out in the middle of the street to make sure the CNN camera could get great footage of the whole thing. The street was sealed off, so how CNN had a camera right outside the door; that’s very hard to understand, because nobody else was allowed on the street.”

CNN denied being tipped off by sources within Robert Mueller’s team or the broader FBI, crediting “reporter’s instinct” with its decision to have a camera crew on-site during the pre-dawn raid of Stone’s home.

President Donald Trump tweeted about CNN’s presence at the scene of Stone’s arrest:

Greatest Witch Hunt in the History of our Country! NO COLLUSION! Border Coyotes, Drug Dealers and Human Traffickers are treated better. Who alerted CNN to be there?

Stone continued, “They then took me to the federal courthouse in Fort Lauderdale where I was shackled, hand and foot, in heavy metal shackles, and put in a holding cell for three hours with three African-American gentlemen who, by the way, all support President Trump’s recent justice reform package, and I waited to go in front of a judge who released me on the bond that we’ve discussed.”

Stone went on, “So this was meant to do two things. One, to taint the jury pool, to paint a picture for the American people that I’m some sort of criminal, even though I’m charged with non-violent process crimes, and also to send a message to others.”

Stone added, “Reading the indictment, there are several people who are preparing to lie on behalf of the Mueller investigation and bear false witness against me. So they want to let them know that this will happen to them unless they say what they’re told to say.”

Stone considered Tapper’s comment as innuendo-laden. He said, “Look, I’m a libertarian. I think people know that. I’m a long-time supporter of same-sex marriage, of the legalization of marijuana. I’m a libertarian conservative. I’m not a social conservative. People know that. My private life is my private life. I’m married and I have two children, five grandchildren, and our business is our business.”

Stone went on, “I don’t know what those implications are. I mean, Jake Tapper looks light in the loafers to me. I don’t know what implication he’s making about me, but I think most people found the whole thing repugnant. Yeah, I like to dress well. I have a fashion site; Stone on Style. You can go there, now. I’ve written books. ‘Stone’s Rules for Men’s Style.’ I’ve been the men’s style correspondent for the Daily Caller and I still am. What’s the implication there?”

Stone described harassment and threats directed at him and his family.

“The hatred, the death threats, the threats against my children, the threats to disfigure my wife,” said Stone. “I’ve had people call the house and say, ‘We know where your children go to school,’ and hang up. The left is sick in this country. They are mentally ill.”

Stone stated, “For two years, now, I’ve been unable to go out in public to a restaurant or through an airport without ugliness and people threatening to kill me and people saying, ‘You’re a Russian spy.’”

Stone described the financial burden of combating the Mueller-led operation’s charges against him.

“It’s destroyed my consulting business,” explained Stone. “I lost my health and life insurance in December, because I could no longer pay the premiums. I had to sell my car. I had a small fund set aside for the college education of my children which I had to liquidate, which had come from the proceeds of my books sales.”

Stone continued, “The internet censorship of my show on Infowars and my Facebook page where — I’ve written five books; two of them New York Times best sellers — strictly through Facebook promotion, because I understand targeting. I can no longer do that because I’m censored and shadowbanned on Facebook.”

“I had to set up a legal defense fund: StoneDefenseFund.com,” said Stone. “Or you can go to WhoFramedRogerStone.com. They both go lead to the same place. That’s the only authorized place if you want to help me and my family.”

Stone pleaded, “I’m broke. I’m looking at $2 million in legal bills to try to not spend the rest of my life in prison on some kind of trumped up phony political charges because I supported Donald Trump for president, and because I helped bring down the most evil, corrupt, foul-mouthed, self-centered, short-tempered kleptocrat in American history: Hillary Rotten Clinton.”

“Obvious question: Did the FBI Director Christopher Wray approve this raid?” asked Stone. “And if so, why? There’s a question for the president. Who approved this? They have to have spent half a million dollars. Who approved this? Christopher Wray may be the president’s worst appointment. He’s a deep stater. He didn’t vote for Donald Trump. He doesn’t support Donald Trump. Why is this guy the FBI director? I don’t really get it.”

Stone went on, “Matthew Whitaker seems to me to be a good man. He’s got authority to act, right now. He has an out of control federal prosecutor who he could limit to Russian collusion based on previous legal decisions, but he doesn’t seem to do so.”

Stone concluded, “This isn’t about me. It’s about the president. They’re coming for him. Anybody who doesn’t see that is naive, and they want me out of the way because I will speak out against it. They want to silence me because I see the big picture.”