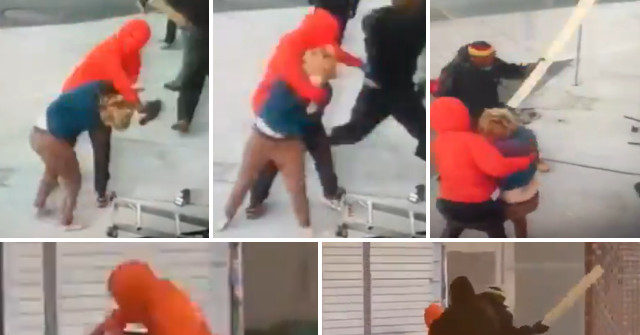 A group of rioters were caught on tape viciously beating a woman outside of a Rochester, NY, business on Saturday as her husband desperately tried to defend her.

Footage shows the woman confronting a group of young men outside of the Rochester Fire Equipment Company on Saturday. According to WHAM, the woman “yelled at the group of people, who were apparently trying to loot the jewelry store next door.”

Do you know any of these men❓Yesterday, May 30, these men violently attacked a store owner & her husband who were trying to protect their business from being looted. Please look at the video & still images. If you know any of them, please call Crime Stoppers @ 423-9300. pic.twitter.com/ECSNcfIcDc

This is maddening. “Protestors” beat a woman w/ sticks as her husband screams & fights back. They were trying to protect their business in Rochester NY, which has been in the community since 1943. @NYGovCuomo what r you doing other than press conferences? pic.twitter.com/AJotmeZBkN

The group continued in hurling objects at the storefront and turned on the woman, punching her and beating her with what appeared to be a large piece of lumber. One assailant grabbed her by the neck, then threw her against a brick wall as he continued to pummel her head.

The woman’s husband tried to intervene, shouting, “Get away from my wife!” and wielding a golf club. The individuals continued in their ruthless attack, turning on the man in the process:

The woman and her husband are tenants who live above Rochester Fire Equipment. Joe Painter tells us he was out grocery shopping when he came upon the scene and started taking video on his cell phone.

Painter, who says he is a veteran of the War in Afghanistan, says it was one of the worst things he’s ever witnessed. He said he stopped recording abruptly because some of the people who attacked the woman in the video started running toward him.

“I turned around, saw people trying to break into some stores, so I just started filming,” Painter said, according to WROC.

WHAM indicated that the woman is recovering from the assault.