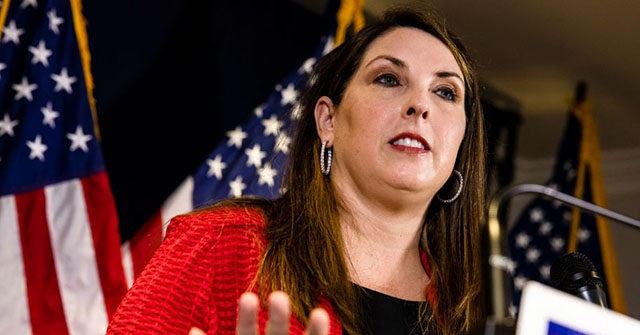 Republican National Committee chairwoman Ronna McDaniel said Wednesday on FNC’s “The Faulkner Focus” that the House Select Committee investigating the riot at the U.S. Capitol on January 6, 2021, is going “beyond its scope” while defending the censure of Reps. Liz Cheney (R-WY) and Adam Kinzinger (R-IL).

Senate Minority Leader Mitch McConnell (R-KY) said, “The issue is whether or not the RNC should be sort of singling out members of our party who may have different views from the majority. That’s not the job of the RNC.”

Host Harris Faulkner said, “What is your reaction to that?”

McDaniel said, “The media has really distorted some of the language in this censure. Legitimate political discourse never includes violence. There was a bomb in front of the RNC on January 6. I know better than anyone violence is not part of that discourse.”

She continued, “We think the January 6 commission has gone beyond its scope. It is reaching into people who weren’t there on January 6. Some of them are RNC members who had nothing to do with any of the violence we saw at the Capitol that we condemn unilaterally.”

McDaniel added, “Disagreement in our party is welcome and makes us great. We have a big tent. But when you have two members who are willing to go with Nancy Pelosi when the minority, when the Republican Party was not able to put people on that committee of their choosing, that’s a step too far. That is where the RNC members who represent the grassroots came down on this issue.”