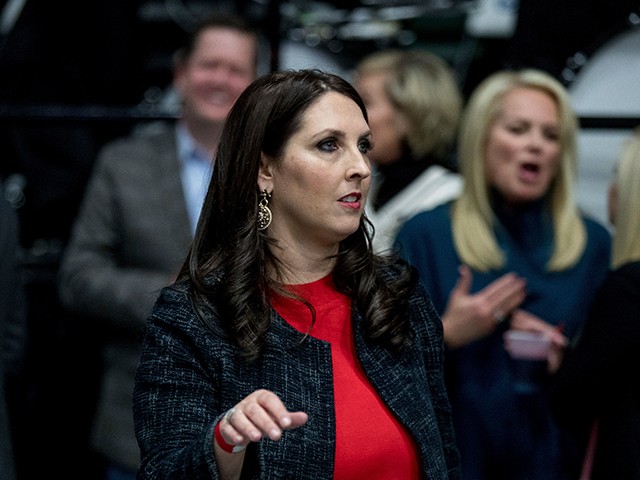 Republican National Committee (RNC) chairwoman Ronna Romney McDaniel says she disagrees with her uncle, Sen. Mitt Romney (R-UT), on his vote to convict President Donald Trump on the first of two partisan Articles of Impeachment, but she as of now has not joined the first family in pushing to formally expel Romney from the GOP over it.

McDaniel tweeted about her uncle’s decision to announce he will vote to convict President Trump that she regularly disagrees with him on such matters.

This is not the first time I have disagreed with Mitt, and I imagine it will not be the last.

The bottom line is President Trump did nothing wrong, and the Republican Party is more united than ever behind him.

I, along with the @GOP, stand with President Trump.

While she says she “disagreed” with Romney on this, McDaniel has not indicated she would support any action to hold him accountable for the vote. Donald Trump, Jr., President Trump’s eldest son, tweeted multiple times throughout the day on Wednesday after the RNC chairwoman’s uncle’s announcement that the GOP should formally remove Romney from the party.

Mitt Romney is forever bitter that he will never be POTUS. He was too weak to beat the Democrats then so he’s joining them now.

He’s now officially a member of the resistance & should be expelled from the @GOP.

Mitt should have already learned this lesson in 2012, but he’s too desperate for affirmation from those who will never actually respect him. #ExpelMitt https://t.co/RIlwOi11ag

Asked Wednesday if the McDaniel sides with the first family and the president when it comes to expelling Romney from the Republican Party, the RNC did not give a yes or no answer. Instead of issuing a statement standing with the president and first family on this, in response to Breitbart News’ inquiries about whether McDaniel supports expelling her uncle from the party as Donald Trump, Jr., has called for, RNC spokesman Steve Guest sent a generic email saying McDaniels’ uncle’s “actions today are wildly out of step with his own constituents.”

“President Donald Trump is more popular in Utah than Mitt Romney,” Guest wrote in the email citing a poll from a local outlet in Utah.

“The Washington Examiner reported that while the majority of Utahns approve of President Trump, Sen. Romney’s approval rating is underwater,” Guest wrote. “The GOP stands with President Trump against the Democrats’ bogus witch hunt.”

Guest also provided the link to McDaniel’s above-cited tweet, but notably still did not specifically answer if the RNC chair stands with the president’s eldest son when it comes to the need to expel her uncle from the GOP.

“There is zero daylight between RNC Chairwoman Ronna McDaniel and President Trump,” Guest added in an additional statement to Breitbart News late Wednesday.