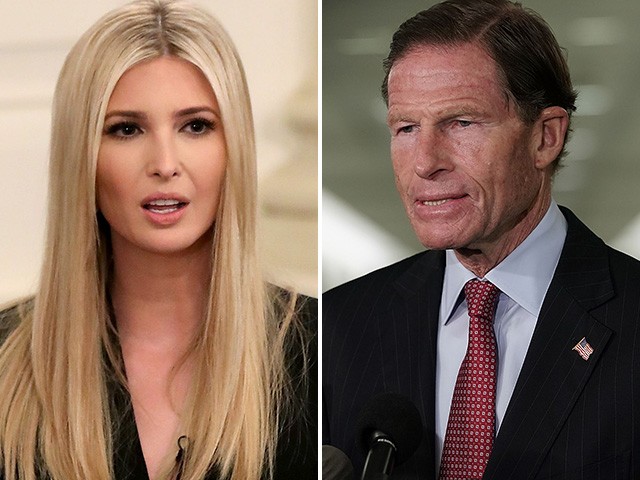 Sen. Richard Blumenthal (D-CT) said there should be “some kind of investigative effort” into the personal email use of senior White House advisor Ivanka Trump during an interview with CNN’s New Day co-anchor John Berman on Tuesday morning.

.@SenBlumenthal: Ivanka Trump using her personal email account for official WH business is part of a “larger story” of the “mixing of public and private as with her clothing brand and her public position…There should be some kind of investigative effort” https://t.co/AeZhLNkXnf pic.twitter.com/kZRoLuRDE1

BERMAN: We have a story in the news this morning that is Ivanka Trump, the Washington Post was the first to report and others have matched since, was using her personal email for government business inside the White House. Obviously, when Hillary Clinton was at the State Department and used her personal email, that became a big story which was covered by everybody for a long time. What do you make of this today?

BLUMENTHAL: Marc Short has the right word for it — “Hypocrisy.” There’s no way she had no knowledge of the rules. But really, there’s a larger story here, which is the mixing of public and private, as with her clothing brand and her public position, the blending and mixing of emails on her private account and public account, and it raises the issue of whether there has been anything improper. There should be some kind of investigative effort.

BLUMENTHAL: Whether it’s through the Office of Government Ethics or through the Congress.

BERMAN: What do you think of the House? The House, which will be led by Democrats in January, unlikely it will happen in the Republican-led Senate, but what do you want to see the House do? Democrats after the whole Hillary Clinton situation, I think, feel as if too much was made of that, and if too much was made of Hillary Clinton’s emails, why make anything of Ivanka Trump’s?

BLUMENTHAL: I think there are real challenges ahead on immigration, on infrastructure, and there are other issues like jobs and the economy that really need to be faced by this Congress. We need to work together and not be driven apart by a party or personal insults.