The anticipated movie about abortionist and convicted murderer Kermit Gosnell delivers a suspenseful detective story that ultimately peels away the sugar coating of the left-wing establishment and political media claim that abortion is “women’s health care.”

Gosnell: The Trial of America’s Biggest Serial Killer – which opens October 12 through GVN Releasing – indicts many more than the man who snipped the spinal cords of babies born alive during abortions.

Filmmakers Ann McElhinney and Phelim McAleer reveal the full story of the Philadelphia abortionist who was considered a “pillar of his community” and an “advocate for women’s ‘reproductive health.’” The establishment media’s embrace of the narrative that abortion is “women’s health care” kept Gosnell out of the news – even as he stood on trial in 2013.

The film is based on the grand jury report that accused the Philadelphia-area abortionist of killing hundreds of babies born alive in his “house of horrors” clinic over several decades. Kermit Gosnell is now serving a life sentence for the murder of three infants and for the involuntary manslaughter of a woman who died following a botched abortion. Additionally, Gosnell was found guilty on most of the more than 200 counts of violations against Pennsylvania’s informed consent law.

The movie follows along with the grand jury report’s opening paragraph:

This case is about a doctor who killed babies and endangered women. What we mean is that he regularly and illegally delivered live, viable, babies in the third trimester of pregnancy – and then murdered these newborns by severing their spinal cords with scissors. The medical practice by which he carried out this business was a filthy fraud in which he overdosed his patients with dangerous drugs, spread venereal disease among them with infected instruments, perforated their wombs and bowels – and, on at least two occasions, caused their deaths. Over the years, many people came to know that something was going on here. But no one put a stop to it.

Even after the release of the grand jury report, media ignored the case of Gosnell for fear of being viewed as antagonistic to a “woman’s right to choose.”

“This case is not about abortion,” is heard emphasized many times throughout the film.

Except that some people came to realize it was about abortion, and that abortion actually snuffs out life, and that women can be endangered by it, especially when politicians, government bureaucrats, judges, and journalists turn the other way in order to be viewed in the “correct” political light.

Dean Cain plays James “Woody” Wood, the intense and somewhat impulsive Catholic police detective who thought he was on a routine drug investigation in Gosnell’s clinic. What he finds instead is horrifying, and, despite warnings against accusing community hero Gosnell – who is willing to do abortions past the legal gestational age to help “poor black women” – Woody can’t let it go.

Ultimately, he ends up convincing the district attorney’s office to take up the case. Sarah Jane Morris plays the role of Assistant District Attorney Lexi McGuire, a mother of five – including a new baby. Politically, she has presented herself as “pro-choice,” but she comes to represent those who experience a conversion of sorts when she is faced with what is happening in Gosnell’s clinic.

After Woody shows her the video of the aborted baby feet in jars in the clinic, Lexi is seen poignantly standing over her own baby, playfully taking his little feet in her hands, as she pauses and ponders.

Lexi ultimately brings the case to the grand jury and eventually to trial.

Thinking that the trial will bring out massive numbers of reporters because of its subject of abortion, the district attorneys and the detectives are stunned when the courtroom is bare. Cyrina Fiallo portrays “citizen journalist” Molly Mullaney, who finally calls attention to the case by tweeting out the now-famous image of the empty courtroom in which the “serial killer’s” case is being tried. 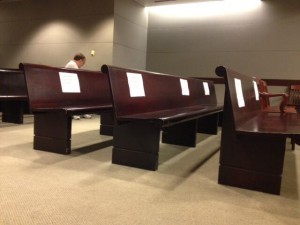 As the trial progresses, Gosnell – played by Earl Billings – fully expects to be vindicated because of what he views as the heroic service he is performing for poor women.

Billings captures the abortionist’s devious, eerie smile and his total detachment from the destruction he causes.

Though the filmmakers do not depict actual images of Gosnell snipping babies’ spines, they skillfully convey the action to their audience through haunting scenes. In one such scene, Gosnell’s young staff members hear a baby cry and find the abortionist standing over a woman during the procedure as he grabs his scissors. In another scene, viewers witness only the emotional expressions of members of the jury who are asked to look at a photo of a baby born alive in Gosnell’s clinic, whose neck has been “snipped.”

Images of the filth in the clinic where women are treated are contrasted during another scene in which Gosnell smashes clams he has purchased to feed his precious, endangered pet turtles he keeps in tanks also in the clinic.

The narrative that abortion must be protected as “women’s health care” is again called into question when a state Department of Health (DOH) nurse is clearly peeved that local police detectives and the FBI are traipsing through Gosnell’s abortion clinic. At one point, the nurse warns the men against disturbing Gosnell’s abortion patients, when she clearly is unconcerned about the filth, blood, and cat excrement at every turn.

When the DOH nurse is before the grand jury, she is asked about why her department has not inspected Gosnell’s clinic.

“We had instructions directly from Gov. Ridge’s [Republican Pennsylvania Gov. Tom Ridge] office not to inspect abortion clinics,” she responds.

In one courtroom scene, Searcy’s character masterfully cross-examines a well-dressed, white, female abortionist – a witness for the state – who supposedly runs a successful facility and is there to point out how abortion is done right.

However, using the visual aids of the tools of her trade – long needle to inject the unborn baby with the digoxin or potassium chloride that will stop his or her heart, and large forceps to break off the baby’s arms and legs before evacuation from the womb – Cohan ultimately makes the point that all abortion is ugly, no matter who is doing it and how clean the clinic. Gosnell is doing it for the poor women is the defense’s claim. What could be wrong with that?

Abortion rights zealots will likely choose to see Gosnell as another effort to reduce access to abortion on demand. What they will miss through that very narrow lens is that the price paid for abortion on demand – and for its use as a major political bargaining chip – is the destruction of the lives of many infants and their mothers. After viewers see Gosnell, it may be difficult to once again believe the claim abortion is “health care.”