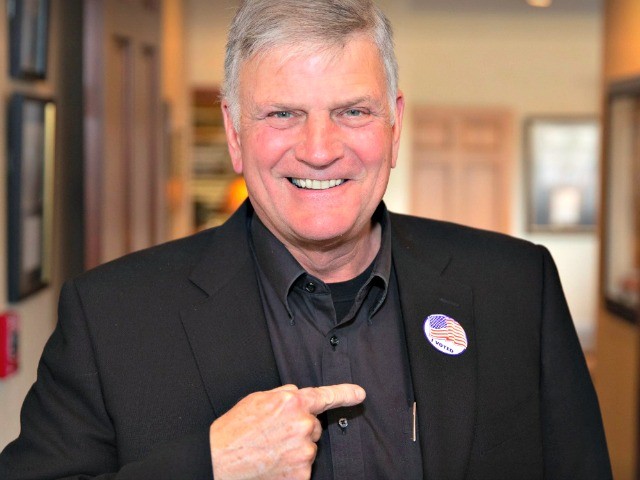 Christian leader Rev. Franklin Graham is urging people of faith to realize the “stakes are high” in the 2018 midterm elections, asking Americans to “pray before you vote,” and to “ask God for wisdom before you cast that ballot.”

“The stakes are very high,” he added.

“The courts, the economic growth of our country – which helps all of us, regardless of our faith – we’re all benefitting from a strong economy,” the evangelical leader observed. “I would certainly ask people to consider what’s at stake, and to pray before you vote.”

While Graham acknowledged there have always been some differences in political opinions among evangelicals, he explained some in the media are trying to create a greater divide after many supported Donald Trump in 2016. The pastor denied there is truth to assertions a new “wave of doubt” exists among Christians when it comes to support for Trump.

“I think probably everyone who voted for President Trump in the last election would vote for him again today,” Graham said. “And they’re going to try to keep him supported in Congress the way he needs to be supported to continue the economic growth, and also his protection of Christian values is very important.”

Graham posted his own get-out-the-vote message on Facebook, urging Americans to consider the tremendous impact elected leaders will have on the nation’s “cherished freedoms.”

Touting his “I Voted” button, Graham lamented the statistic that “less than half of all eligible voters cast a ballot in midterm elections.”

“That’s a ton of wasted opportunities isn’t it?” he asked. “Think about it. Those who win elections make decisions that impact every one of us at so many levels.”

They impact our children and grandchildren by deciding what schools can and cannot do. Their laws and regulations impact our livelihoods. They make decisions impacting cherished freedoms such as speech, religion, conscience, security, and privacy. They decide how much money to spend and how much we pay in taxes to run the government. They are a part of deciding whether we will be a country of order and the rule of law or whether we will continue with immigration laws that are ineffective and unmanageable. They help set the direction of our cities, states, and our country.

“Are these issues important to you?” Graham asked. “Then you need to research the options on the ballot, PRAY and ask God for His wisdom, and make sure you VOTE.”