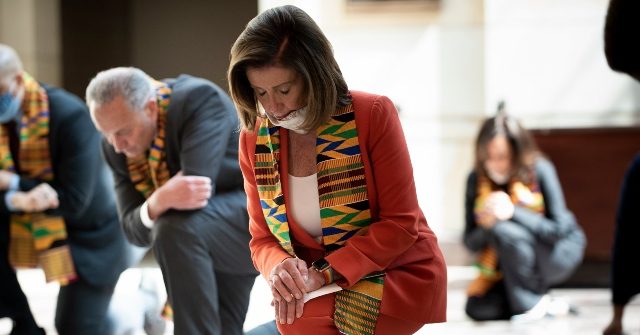 Scott’s joke referenced the fictional Sub-Saharan African country of Wakanda, the home of Black Panther, a Marvel Comics superhero. A film based on the character and location was released in 2018.

Scott said, “That ridiculous display by Congress of putting those kente cloths around their necks and kneeling on the ground, half of them couldn’t even get back up. They were pandering so hard, ‘Help, I’ve pandered and I can’t get up!’”

“I don’t even know whose dumb idea that was to put those kente cloths around their necks and kneel down,” continued Scott. “Nancy had to get helped up. Jerry Nadler didn’t even go down, because he knew he wasn’t going to get back up. I saw so many memes, and they were mocked about it. They tried to have a white Wakanda moment.”

Scott considered, “Can you imagine if Donald Trump had come up with a kente cloth around his neck and kneeled down? What the press would have done, what the left would have done?”
LISTEN

Pollak asked about the absence of criticism from Democrats and the left towards rioters, looters, vandals, and others committing crimes in the context of unrest following the death of George Floyd.

“There’s no moral outrage, because the left has become immoral to the extent of depravity,” Scott replied. “Let me say this, if the left could pin that murder on Donald Trump, they would be happy. The left has an unspoken gag order on criticism of the protests, of the rioters, of the looters, [and] of the criminality.”

Left-wing and Democrat criticism of President Donald Trump’s holding of a bible in the burned St. John’s Church, next to the White House, was “disgusting,” Scott determined.

“I noticed how disgusting it was for the left to criticize a president holding up a bible, but they did not criticize the burning of one of the nation’s historic churches,” Scott remarked. “The left has basically become an amoral entity, and amoral component. They have no morals. Nothing is off limits. The left hates Donald Trump — and by extension the right — so bad that they would destroy this country to remove him from office, or they’ll destroy this country to remove the right’s influence.”

Pain and suffering is exploited for political and personal advantage by some persons and groups, noted Scott.

“There’s always a criminal or sinister element at work with criminal or sinister motives that endeavor to exploit human pain, human grief, human injustice, [and] social injustice for their own purposes,” stated Scott. “They want to capitalize on pain and suffering and social injustice for their own sinister purposes that are not connected to George Floyd, at all. [They] exploit that man’s death for their own nefarious purposes, and that’s what I saw with the violent protests. You had anarchists that were using George Floyd’s death as a cover for that anarchy, and you saw criminals using Georgia Floyd’s death as justification for their criminality, and that right there is intolerable.”