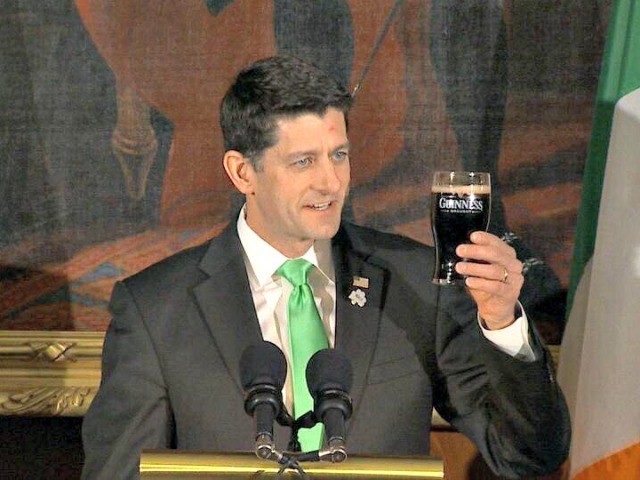 His Irish-only bill was quietly pushed through the House on November 28 without a recorded vote by legislators. It is now awaiting approval by the U.S. Senate — but the outsourcing and amnesty bill will be blocked if even one U.S. senator privately or publicly notifies GOP Senate Majority Leader Mitch McConnell that he or she will oppose the measure.

The plan would provide the Irish — but not anyone else — with roughly 50,000 endlessly renewable work permits per decade.

In 2005, President George W. Bush signed a treaty offering 10,500 annual E-3 work permits to Australian college graduates. Lobbyists say roughly half of those visas are unused each year, so the Ryan plan would annually allocate the roughly 5,000 unused E-3 visas to Irish graduates so they can take jobs sought by American graduates.

Currently, about 1.5 million foreign contract workers are holding college graduate jobs in the United States. The foreign workers are allowed to get these jobs via the H-1B, L-1, and other visa programs, and they help suppress the salaries earned by millions of American college graduates who will vote for or against President Trump in 2020.

The beneficiaries of the Ryan plan would include many Irish who are working illegally in the United States, said Billy Lawless, a Chicago-based Irish politician who is responsible for representing the Irish diaspora in the United States. “The undocumented are number one in my mind … maybe more than I think might qualify for this,” he told a radio show on November 13.

“More importantly, it is a stepping stone” to further reforms that could increase migration from Ireland, Lawless said. “Irish communities are suffering because we are not getting the young Irish out [to the United States] anymore.”

Lawless runs a restaurant in Chicago and is a member of the largely powerless Senate in the Irish Parliament.

The Irish government has promised to repay Ryan’s huge gift of 50,000 extra jobs per decade by allowing older Americans to spend their retirement savings in Ireland.

This one-sided deal will give the Irish government two wins — the ability to get tens of thousands of U.S. visas for the Irish — including Irish illegals now living in the United States — as well as the ability to create more jobs in Ireland by importing retired Americans and their hugely valuable 401K retirement accounts.

Lawless, however, insisted the plan is reciprocal because it would allow wealthier American retirees aged 55 and above to get to live in Ireland. “Here’s the real kicker: after five years, we will give them Irish citizenship if they want it,” he told the radio show. “It is a huge benefit … so it is not a one-way street, this bill.”

The government-funded Irish TV network reported on the November 28 vote:

Those [lobbying] efforts have been led by the Department of Foreign Affairs, the Irish Embassy in Washington and the government’s special envoy to the US Fine Gael [legislator] John Deasy.

Speaking in Washington following last night’s vote, Mr Deasy welcomed the passage of the bill in the House of Representatives but warned that there’s still some way to go.

“The bill will now be sent to the US Senate and it needs to be passed there by unanimous consent meaning that it will require the agreement of all 100 senators for this to be signed into law”, he said.

This is a really positive development for future generations to travel to USA. Still work to do but thanks to our team in @IrelandEmbUSA and @JohnDeasyTD for their tireless work and thanks to @RepRichardNeal and all our friends in US House of Representatives. 🇺🇸 https://t.co/d0SN7o5PMv

Deasy did not return calls from Breitbart News.

American politicians, including Ryan, did not bother to win any gains for young Americans, such as the equal opportunity to get good jobs in Ireland.

Lawless said the outsourcing-and-amnesty plan is backed by White House chief of staff John Kelly, as well as Mike Mulvaney, the business-first, pro-migration director of the Office of Management and Budget. “And Speaker Ryan, Paul Ryan, of course,” he said.

Ryan has repeatedly touted his ancestors’ Irish roots while covertly undermining Trump’s pro-American immigration reforms and Trump’s effort to build a barrier on the U.S.-Mexico border.

In June, Ryan blocked the passage of the Trump-backed pro-American immigration reforms by splitting the GOP’s votes between two rival reform bills. “If it has been the only bill offered, it might have passed,” said Rep. Bob Goodlatte, the pro-reform chairman of the House Judiciary Committee, who authored the pro-American bill. “If we had gotten half of [the GOP ‘no’ voters] to join with us, we would have gotten there,” he said.

Ryan’s support for more Irish immigration and more outsourcing spotlights his career-long support for the “any willing worker” plan favored by President George W. Bush. The very radical policy would allow U.S. employers to hire anyone in the world for U.S. jobs when Americans decline to take the jobs at the offered minimal wage:

Ryan’s business-first ideology helped the GOP lose 40 seats and its House majority in November, leaving Trump to deal with investigations and hostility from the new Democrat majority.

Ryan is expected to take a job in the nation’s banking industry. The industry gains enormously when the government annually imports approximately 1.1 million new consumers and workers via legal immigration.

Passage of the Irish-only outsourcing-and-amnesty bill would likely spur charges of racism against GOP legislators who wish to enforce the nation’s immigration laws and to protect Americans from Democrat calls for more cheap-labor migration:

You got anything to say about E-3 Irish visa, which imports free labor, or does it just have to do with RACE???https://t.co/SSRv3h5fz6

Lawless owns restaurants in Chicago and is an appointed member of the largely powerless Senate in the Irish Parliament. In June, Lawless said in a speech in the Irish Senate that Trump’s prosecution of migrants who bring children over the border is a “horrendous policy”:

Since Trump withdrew that enforcement policy, the number of economic migrants getting through the border with children has risen dramatically.

Lawless said the outsourcing-and-amnesty push has been aided by Irish ethnic groups in the United States, such as the Ancient Order of Hibernians. Bruce Morrison, a lobbyist and former representative who helped write the nation’s largest outsourcing program, the H-1B visa, has also aided the push. “Everybody has chimed in,” he said.

The push to outsource U.S. jobs to Irish graduates comes as the Irish government also tries to import more foreigners into Ireland.

Varadkar wishes to raise the nation’s population from 4.8 million in 2017 to 5.8 million in 2040. Varadkar is the son of an Indian immigrant and is increasingly popular among anti-national elites in European politics:

Also, pro-migration advocates are trying to provide birthright citizenship to illegal migrants in Ireland. The very unpopular policy practice was ended by a 2004 referendum.

In the United States, large numbers of rational foreigners have used the birthright legalization process since the 1970s to win citizenship.

This inflow has transformed California. For example, the once-economically equal state now has one of the largest wealth gaps between the rich and poor, as well as low-quality schools and high housing costs. Many children of California’s 1970s population have fled to other states, regardless of their politics. This year, California Sen. Dianne Feinstein faced a serious primary challenge from the son of an illegal immigrant:

The rising legal and illegal inflow of migrants, especially Asians, and the wealth created by the Internet economy are also pricing poor U.S. Latinos and blacks out of middle-class and coastal towns, such as Berkeley and Oakland. But this process has generated windfall profits for real estate owners.