The Biden campaign recently released an ad showing Biden meeting with military leaders when he was vice president. One of the photos showed MacFarland, then commander of the U.S.-led anti-ISIS military coalition.

MacFarland posted on his LinkedIn page on Saturday that he was surprised to see his photo used, said it did not amount to an endorsement of Biden, and that he requested the campaign take it down, but that the campaign refused.

MacFarland wrote on his LinkedIn page:

Much to my surprise, I have been featured more than once in VP Joe Biden’s political ad campaign. The picture below was taken during his visit to Iraq when I was leading the campaign against ISIS from 2015-2016 and actually had nothing to do with the subject of the ad, which pertained to a 92-3 Senate vote in 2007. A number of people have understandably inferred that my appearance constitutes an endorsement of the former Vice President. It does not. To be clear, I have not endorsed President [Donald] Trump, either. I’m not a political person, but this isn’t about just me. I object to the use of ANY military personnel in uniform in political ads – full stop. That goes double for generals and admirals, even if we have since retired, as I have. Many people wouldn’t know or care about that distinction. Also troubling, nobody asked permission to use my image. My request to remove it was denied with the assurance it was completely legal because of the disclaimer at the bottom of the ad and because my name tag has been blurred. Maybe, but like most people, I didn’t notice that until it was pointed out to me. So, please, let’s keep the military out of politics and vice versa. I think our country will be better off if we do. 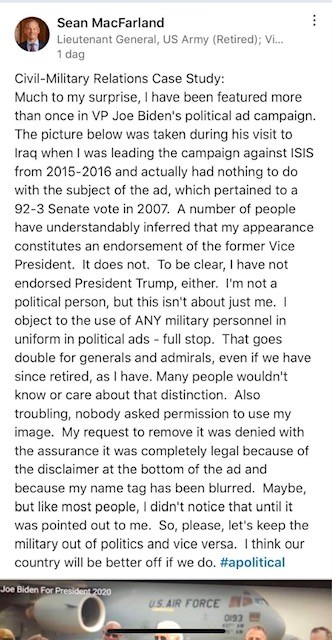 MacFarland made it clear he has not endorsed anyone, and is “not a political person.”

In March 2019, he made a rare exception to denounce “identity politics,” calling it a “cancer” in the U.S. military. During a talk at the American Enterprise Institute, he was asked by an audience member to weigh in on how politics and polarization of the country was affecting the U.S. military.

As reported by Breitbart News, he replied:

My last job in the Army — I was the deputy commander for Training and Doctrine Command, so all the recruiting, and all the initial entry training was under Training and Doctrine Command, and it is something that we do focus on. We call it ‘soldierization.’ We assimilate people into the Army, and teach them what it’s like to be part of a cohesive whole.

And many people come from — well soldiers come from all walks of life and we bring them all together, and it’s remarkable that after basic training or their initial training, how acculturated they become. I mean we used to talk about the melting pot in schools in America. I don’t know if we still do anymore. My guess is we don’t.

And I mean I just heard a statistic recently that about 80 percent of American kids consider themselves as just plain old Americans before they enter high school, and about two-thirds of them about halfway through college become hyphenated-Americans.

We remove those hyphens in the Army, in the military. You know, ‘You’re a soldier, next question.’ You know, we all wear the same patch on our right shoulder — the American flag. And that’s what it’s all about.

And that’s a process that most armies do not go really through. You probably don’t have to go through it in some armies where everybody is mono-linguistic, mono-ethnic, or whatever, you know, Finland, or some place like that. But in the United States we do. They should go through it in Arab armies, but they don’t. And that’s a significant difference.

“Is it getting harder in the U.S. military to assimilate everybody and get everybody on the same — playing for the same team? Yea, it is. Identity politics is a cancer. And an army is a reflection of its society,” he continued. “And we have seen what Balkanization looks like. I’ve been in the Balkans multiple times and in Afghanistan and Iraq. And it’s a dangerous path that we’ve moving along, and eventually it’s going to become too hard for us to fix in the military.”

The Biden campaign ad also featured former Defense Secretary Robert Gates, who harshly criticized Biden as vice president. He wrote in his book Duty that Biden was “wrong on nearly every major foreign policy and national security issue over the past four decades.”

In an interview with CBS in 2019, Gates said he stood by those remarks and indicated Biden’s age could be “problematic.”