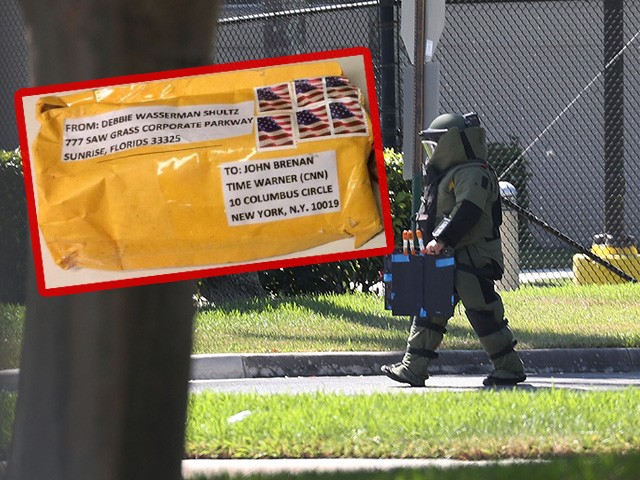 “You have to do a two-track investigation,” said McDaniel. “Look at the obvious conclusions that you might come to that this is somebody opposed to the Democratic Party or Democratic politicians or you look at the possibility that it’s sort of a false flag that is set up, so you would do two separate investigations, sort of a yin and yang here to compare the two possibilities and track them down.”

McDaniel noted how the sending of mail bombs qualifies as “domestic terrorism.”

It’s a criminal act. It’s not only a criminal act under both state and federal laws, but it fits the definition of domestic terrorism. If you look at the definition [of domestic terrorism], it has to be a criminal act with violence [and] occur within the jurisdiction of the United States, and it has to do one of three things: It has to either intimidate or coerce a civilian population, it has to influence the policy of government through either intimidation or coercion, or it has to affect the conduct of a government by one of three ways — one of which is assassination.

“This was pretty amateur in terms of the construction,” said McDaniel. “Everything that’s on the little sheet we used to have sitting by our desks from Army [Criminal Investigation Command] about suspicious packages was met by this one; the way that it was clumsily wrapped in tape, the fact that it was an awkward oblong sort of bulky package, the fact it had too much postage. It just fit the definition of a suspicious package for the Postal Service.”

“There is a lot of divisiveness on both sides at this point and we need to get away from that,” advised McDaniel, “if for no other reason than I think that the more divisive the political debate, the easier it is to dehumanize individuals that might be victims whether they’re on the right or the left.”

McDaniel concluded, “It think it’s just an attempt, like Commissioner Kerik said, by either a right-wing nut or a left-wing nut to sow division before the election, so I would just urge all your listeners not to fall into that trap, to embrace political discussion and not political divisiveness as a country with two weeks we’ve got before this election.”

Mansour concurred, “We make our voices heard at the ballot box. Obviously, this is not how we do things in this country, with violence. It’s just anathema to everything that we stand for in this country. We believe in the peaceful transition of power every time we have an election. We don’t do this sort of thing.”