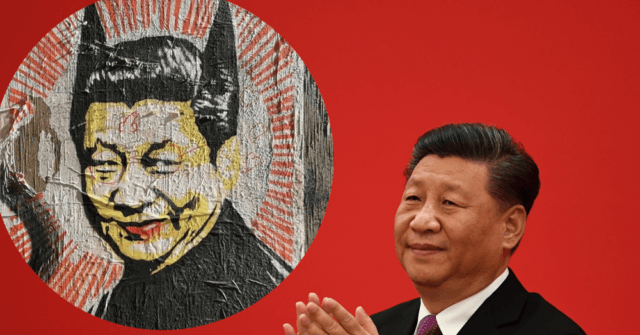 A portrait of Chinese communist leader Xi Jinping cast as ‘BAT MAN’ has been removed from a Swedish restaurant after users on social media complained that the satirical jab at Xi’s role in the spread of the Wuhan coronavirus was racist.

On Saturday, local fashion blogger Bryan Gray Yambao, who goes by ‘Bryanboy’ on social media, visited the Riche restaurant in central Stockholm with a friend of his from Hong Kong. The pair noticed the bat-like portrayal of the Chinese dictator, which adorned Xi Jinping with two pronounced bat ears.

Bryanboy took to Instagram to pronounce that he was “embarrassed and mortified” that he took his Hong Kong Chinese friend to the restaurant, comparing the satirical portrait to the “racist abuse” East Asians have experienced during the pandemic.

“The racism was so distressing!” he said, going on to question: “Am I being a Karen? I hate the idea of being a Karen, but it was just absolutely surreal. I was in shock.”

The post was quickly shared, and the restaurant on Monday told the Swedish newspaper Aftonbladet that it would be removing the artwork in response to the backlash.

When the artwork was debuted, the restaurant wrote in a press release that the Xi Jinping painting “relates the fact that the coronavirus was early reported to have infected humans first through bats that were sold as food at the animal market in the city of Wuhan in China”.

Yet the restaurant ultimately crumbled under the online pressure, with the man who sourced the art for the restaurant, Carl Carboni, saying: “Of course, we take into account the criticism that has been made and our intention was of course not that anyone would be badly affected by the work. After an internal dialogue, we have, in consultation with the artist, decided to take down the exhibition. We apologise to those who have taken it badly.”

Iron, the artist who painted the portrait mocking the Chinese Communist Party leader, defended his work saying that he did not intend his “BAT MAN” to be racist and that he intended to criticise “dictator Xi Jinping and CCP’s handling of the virus outbreak”.

He said that the portrait was part of a series of “hardcore satire portraits” of world leaders including Russian President Vladimir Putin and the leader of the Swedish populist right-wing Social Democrats Jimmie Åkesson.

The artist did also apologise before the outrage mob, however, saying that the work was “accidentally” racist. “I can’t stress enough how much I apologise for the people who got their feelings hurt by it,” he said.

Tonight my “BAT MAN” blew up for beeing racist against Asian people. My intention was never for it to be. Thou racism and hate IS a part of our time and that is included in the symbolism. I cant stretch enough how much i apologise for the people who got their feelings hurt by it. I have been working with hardcore satire portraits alot and making a fool of people in power (swipe ex HATE and PUTAN). My intention of the “BAT MAN” was the same, represented by the dictator Xi Jinping and CCP’s handling of the virus outbreak. But i now, thanks to you teatching me, realised that it hit all wrong… So I repeat, my intention was only to make a fool of Xi/CCP, NOT to make a racist comment that hurt a lot of people, but i accedentally did, and I again apologise to you who feel that way. So for that sake i will take down the posts of it, but im keeping this one, to contribute too the open discussion and so you get your voices herd. That was my intention all along.

Sweden and the Chinese Communist Party have been involved in an ongoing diplomatic row over the detention and imprisonment of Swedish national and former Hong Kong bookseller Gui Minhai.

In 2015, Gui disappeared from his home in Thailand, with many believing that Chinese agents abducted him. He later appeared in mainland China, giving what seemed to be a forced confession broadcast on state television.

He was among several high-profile Hong Kong booksellers, who were critical of the Chinese leadership, to disappear around the same time. The disappearances were one of the first indications of the CCP’s intent to crack down on the liberties promised to the city in the Sino-British Joint Declaration on Hong Kong.

In February of this year, Gui was sentenced to 10 years in prison in China. The Swedish government has demanded that the naturalised Swedish citizen be set free.

“We have consistently made it clear that we demand Gui Minhai be released so that he can be reunited with his daughter and family,” the Foreign Ministry said.