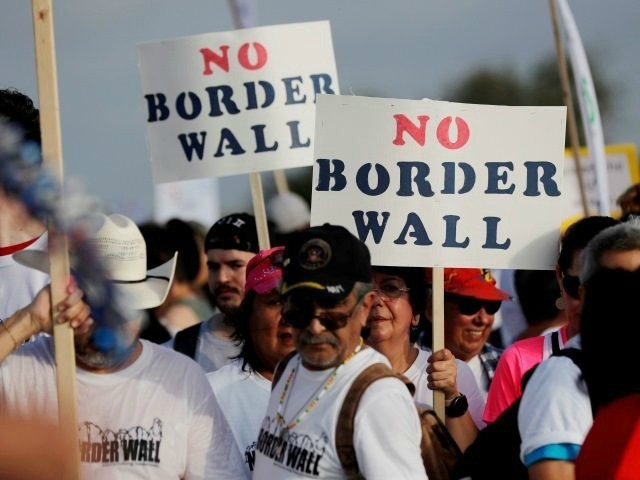 Opponents of President Donald Trump’s “racist” border wall on Saturday protested against what they claimed is a “symbol of hate” in El Paso, Texas.

A day after Trump agreed to re-open the government for three weeks, the activists reportedly “started at San Jacinto Plaza, stopped at the Santa Fe Bridge, and ended in the neighborhood of Chihuahuita, where construction to repair part of the border fence began a few months ago.”

Rep. Veronica Escobar (D-TX), who replaced Robert Francis “Beto” O’Rourke in Congress, reportedly told activists that “the call for a wall is a symbol of hate.”

“The call for a wall is a symbol of hate” – @RepEscobar

Border Network for Human Rights organized the march, and the demonstrations show just how tough it will be for Democrats to compromise with Trump on the border wall without angering their left-wing base.

“We will continue to fight… we will take the streets, we’re actually going to come and do this again and again if Trump continues to divide our families, to separate our families, or to actually insist on the idea of building this wall,” Fernando Garcia, the Director of the Border Network for Human Rights, reportedly said, according to KTSM.

After agreeing to re-open the government, Trump called on Democrats to give him a “fair deal” on a border wall.

“If we don’t get a fair deal from Congress, the government either shuts down on February 15th again or I will use the powers afforded to me under the laws and the Constitution of the United States to address this emergency,” Trump said on Friday.

The protesters, though, reportedly demanded that Congress “stand strong against funding a racist wall at the southern border.”

Hundreds now protesting in Downtown El Paso in opposition to the #TrumpWall and for #Immigration reform. #ResistingTheWall pic.twitter.com/bf73k1cFM3

Hundreds of protesters gather steps from the U.S./Mexico border in El Paso Saturday to denounce further construction of a wall between the two nations. pic.twitter.com/r3F2KH5JJd

Hundreds of people in the border community of El Paso took to the streets in support of Immigration Reform, and against a wall! ✊🏽👊🏾

Congress must stand strong against funding a racist wall at the southern border!#ResistingTheWall #SomosMas pic.twitter.com/i7EClTeFSA

The final location of the #immigration rally is the site of the new #BorderWall being built in Downtown El Paso. This wall was funded by the 2017 Immigration Bill and replaces 4mi of older chain link fencing. pic.twitter.com/Plb8oMeIvH

Thousands march through downtown El Paso to protest the construction of a border wall. pic.twitter.com/eCt8dJsocj

Far from the beltway, yesterday’s breakthrough can be felt in border communities like El Paso that poured into the streets today to celebrate a small victory in the much longer struggle against hate, family separation and border walls. pic.twitter.com/1xhPTyCdlZ