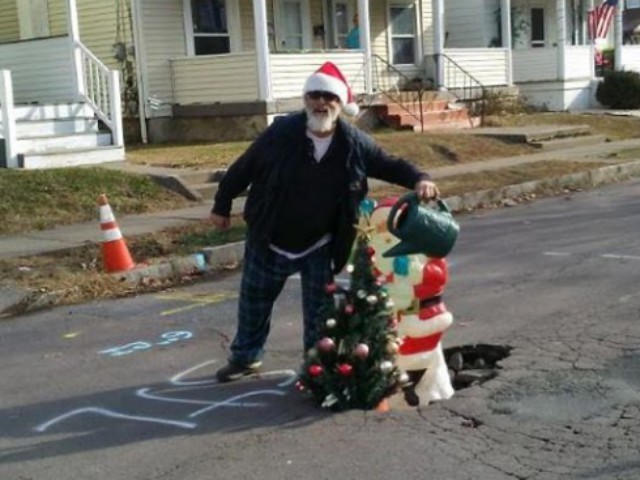 A group of industrious residents in one Pennsylvania neighborhood decided to fix a massive pothole in the road with some Christmas cheer— by “planting” a Christmas tree in the hole.

The neighbors, fed up at the town of Wilkes-Barre for not fixing a sinkhole in the middle of Sturdevant Street, decided to take matters into their own hands, using an artificial Christmas tree topped with a star and adorned with ornaments to cover the pothole.

Wilkes-Barre resident Marietta Spak said her inspiration for the fix came from her Christmas decorations.

“I was upstairs in the attic and was looking for more Christmas decorations and thought, ‘That would look nice in the hole,’” said Spak.

Spak then took a fake fir tree out of her car and placed it in the hole. The Wilkes-Barre resident said it was her way of raising awareness of the public safety issue to keep drivers from hitting the hole.

“It can cause so many problems with these holes. That’s not just a pothole. That’s sinkage, and it’s starting to spider web,” Spak said.

Other neighbors soon joined the fray, placing their own Christmas decorations inside the hole:

Officials with Wilkes-Barre’s Department of Public Works said they were aware of the Christmas decorations covering the sinkhole.

“We have a lot of comedians in the area who put trees in there. I think it’s funny, too, Christmas spirit,” said Department of Public Works employee David Iskra.

City leaders eventually took notice and covered the hole with a metal slab, but it looks like the sinkhole will soon be fixed.

The company in charge of paving the city’s roads said the problem could be fixed as soon as Tuesday, claiming it could not get to the problem sooner because it had to attend to other areas in need of fixing.