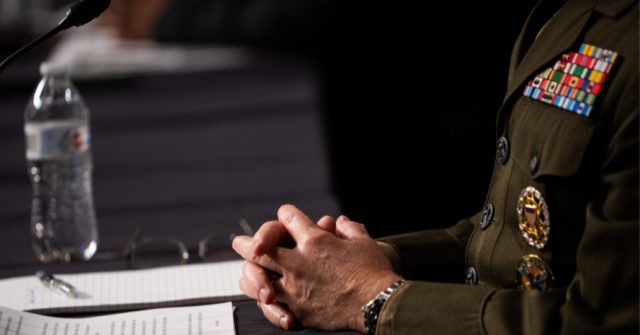 Senate Republicans on Tuesday forced Pentagon leaders during a hearing to admit they recommended to President Joe Biden that he leave 2,500 troops in Afghanistan, despite the president claiming no one told him to do so.

Biden had claimed in an August 19 interview with ABC News’s George Stephanopoulos that “no one” told him to keep 2,500 troops in Afghanistan.

Stephanopoulos asked Biden: “Your military advisors did not tell you, ‘No, we should just keep 2,500 troops. It’s been a stable situation for the last several years. We can do that. We can continue to do that’?” Biden responded, “No. No one said that to me that I can recall.”

However, during the hearing, Republican senators forced Pentagon leaders to say they had agreed with the previous U.S. commander in Afghanistan’s recommendation to leave 2,500 forces there, and had relayed that to Biden — who ultimately did not follow that recommendation.

McKenzie added, “I also had a view that the withdrawal of those forces would lead inevitably to the collapse of the Afghan military forces and eventually the Afghan government.” He also said he was “confident” Biden heard all recommendations and had listened to Miller “very thoughtfully.”

Under questioning from Sen. Tom Cotton (R-AR), Chairman of the Joint Chiefs of Staff Army Gen. Mark Milley admitted that it was also his assessment that there should be a “steady state of 2,500” forces in Afghanistan.

Asked whether Biden’s statement to Stephanopoulos that no military leader advised him to leave a small troop presence in Afghanistan was true, Defense Secretary Lloyd Austin said, “Their input was received by the president and considered by the president for sure.”

Milley also told Sen. Deb Fischer (R-NE), “I can tell you with 100 percent certainty that the military voice was heard and it was considered.”

When Fischer asked him, “It was considered but not followed, correct?” Milley responded, “We have — presidents are elected for reasons.”

However, the defense leaders would not openly say that Biden had lied during his interview with Stephanopoulos.

Pressed by Sen. Dan Sullivan (R-AK) on whether Biden’s statement was false, Milley first claimed he did not see the interview and when pressed, said, “I’m not going to characterize a statement by the president of the United States.”

McKenzie said, “I’ve given you my opinion on the matter.” Sen. Ben Sasse (R-NE) excoriated Biden in a statement:

President Biden lied when he told the American people that nobody urged him to keep 2,500 troops in Afghanistan. Today, under oath, General McKenzie flatly contradicted the President. This is the worst American foreign policy disaster in a generation and the President is trying to cover his ass with political spin.

“Throughout this bloody and shameful disaster, President Biden has relied on lies, spin, and happy talk to get from one news cycle to the next. This is not a PR crisis — this is a moral crisis of the President’s own making,” he added.