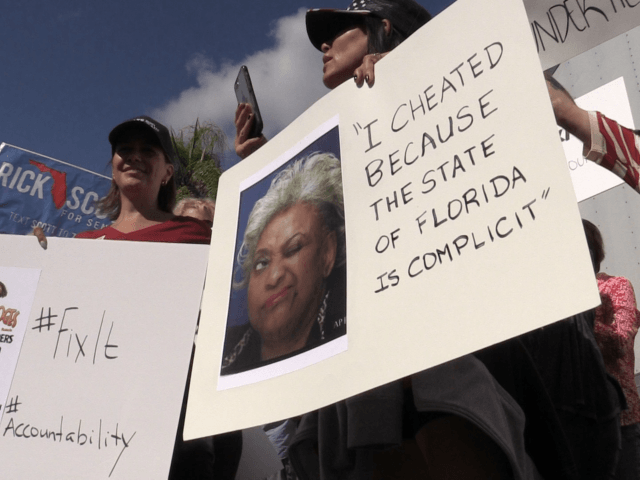 Republican protestors have begun chanting “lock her up” outside a Florida elections office as news breaks about how badly Broward County Board of Elections Supervisor Brenda Snipes is botching the 2018 election returns.

Election chief Snipes is once again caught up in the middle of controversy as votes in her Democrat stronghold continue to appear seemingly out of thin air as far as protesters are concerned.

A large group of Republican voters have formed to protest the sudden votes appearing days after the legal submission date, according to the Hill.

Republican protest crowd doubles to about 60. Chant of lock her up breaks out pic.twitter.com/PfBHkbokha

Florida Governor Rick Scott has already set a lawsuit in motion against Snipes claiming she is withholding information about the votes that were suddenly found after he won his Senate race with a narrow margin over Democrat Bill Nelson.

President Donald Trump also commented on the controversy in Florida with a sarcastic tweet that the problem could be “blamed on the Russians”:

You mean they are just now finding votes in Florida and Georgia – but the Election was on Tuesday? Let’s blame the Russians and demand an immediate apology from President Putin!

Trump went on with nearly a half dozen tweets commenting on the “vote fraud” in Florida:

Rick Scott was up by 50,000+ votes on Election Day, now they “found” many votes and he is only up 15,000 votes. “The Broward Effect.” How come they never find Republican votes?

Mayor Gillum conceded on Election Day and now Broward County has put him “back into play.” Bill Nelson conceded Election – now he’s back in play!? This is an embarrassment to our Country and to Democracy!

In the 2016 Election I was winning by so much in Florida that Broward County, which was very late with vote tabulation and probably getting ready to do a “number,” couldn’t do it because not enough people live in Broward for them to falsify a victory!

Florida Senator Marco Rubio also commented on what he sees as a growing case of voter fraud in Broward County:

How can anyone have confidence that the #BrowardCounty election supervisor will be fair when last night she made clear her personal animus toward Gov. Scott & towards the states top law enforcement agency when she claimed he “owns” the #Florida Department of Law Enforcement? https://t.co/K1lrwzRcnE

Rubio has kept the pressure on, too, by tweeting a number of messages revealing the laws being broken by Supervisor Snipes in Broward County.

President Trump then thanked the Florida Senator for his input:

Thank you @marcorubio for helping to expose the potential corruption going on with respect to Election Theft in Broward and Palm Beach Counties. The WORLD is now watching closely!