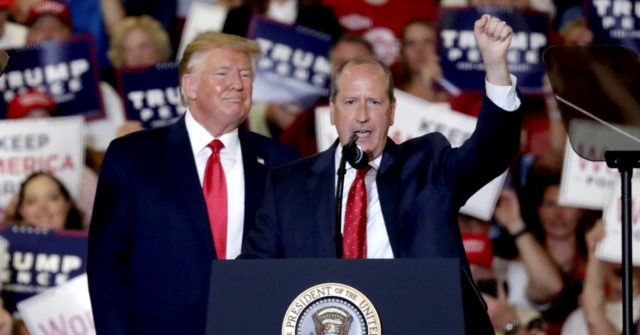 Dave Wasserman, political editor of the Cook Report, called the race for Bishop at 9:55 p.m. eastern in this tweet:

Both parties and their related groups spent heavily in this hotly contested bellwether election in this key 2020 battleground state.

Bishop, a conservative Republican currently serving in the North Carolina State Senate, based his campaign on strong support for the Trump agenda. The president, for his part, strongly supported Bishop. On Monday, the night before the election, Trump appeared with Bishop at a boisterous rally in Fayetteville, North Carolina in the conservative eastern part of the district. At the rally, Trump heavily criticized McCready for supporting the socialist agenda of Speaker Nancy Pelosi and the Squad.

The Ninth Congressional District seat in the U.S. House of Representatives has been empty since the 116th Congress convened in January, due to allegations of election ballot irregularities that caused the North Carolina State Board of Elections’ refusal to certify the results of the 2018 midterm election in the district between Republican Mark Harris and Democrat Dan McCready. On election night, Harris held a 905 vote lead. In January,  the NCSBE ordered this new special election to be held.

For all the spending by both parties, the voting behavior in this special election almost mirrored that of the November 2018 mid term election.

The Ninth Congressional District consists of all or part of eight counties, stretching from Mecklenburg County (Charlotte) on its western boundaries to Bladen County on its eastern boundaries. In 2016, President Trump defeated Hillary Clinton in the district by 12 points. He won the state of North Carolina by three points.

Half of the 50 precincts in Mecklenburg County are in Bishop’s current State Senate district.

If the final margin of victory is less than one percent, the losing candidate can request a machine recount within 48 hours of the closing of the polls. If that machine recount changes the outcome, the candidate who is the loser after that recount.

McCready had a lead in early voting, but it turned out not to be enough, as Politico’s Jake Sherman noted in this tweet:

For what it’s worth — before vote came in today, a smart NC person told me if McCready was up by 8000 or more in early vote total, Bishop would not be able to make that up.

The vote totals, by county, with 86 percent of precincts reporting as of 9:50 p.m. eastern time were: