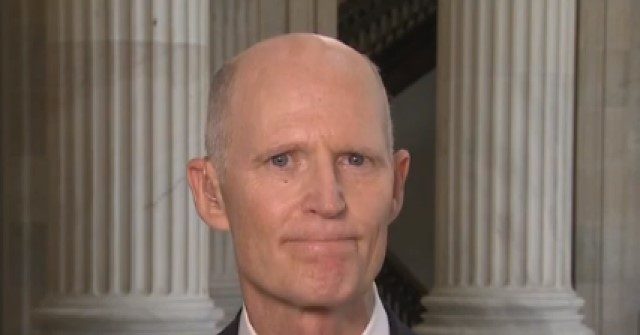 National Republican Senatorial Committee (NRSC) Chairman Rick Scott sent out a memo to voters, donors, and leaders throughout the party Tuesday declaring the “Republican Civil War is now canceled,” detailing a path to victory in the 2022 midterms.

“The Democrats control the White House, the Senate, and the House of Representatives. In other words, they control Washington,” Sen. Scott writes.

Here is what they have done and are in the process of doing so far: cutting border security, granting amnesty to illegals, cancelling the Keystone pipeline destroying thousands of jobs, allowing males to compete in women’s sports, banning fracking on federal lands making us less energy independent and using tax dollars to pay for abortion in foreign countries. And they have built an amazing military-style wall around the US Capitol, at the same time they are stopping construction on the wall at our southern border.

Looking backward won’t help us win. Let us look forward and fix our eyes on what is important – an America with plenty of good-paying jobs, an America with great schools and safe communities, an America with freedoms and liberties people around the world would die for.  The only way we can lose is if we stop ourselves by needlessly fracturing. Again, now is not the time. Save it for another day.

You and I are being called upon to rescue our nation from a socialist experiment that always has a tragic finale, an ending that involves loss – loss of prosperity, loss of freedom and loss of life. Let’s work together, let’s focus forward, and let’s get to work to create the America our families want and deserve.

Scott is reportedly turning his focus on defeating Sen. Raphael Warnock (D-GA), who will be on the ballot again in 2022 to secure a full six-year term, and Sen. Mark Kelly (D-Ariz.), who just won a special election to complete the last two years of the late John McCain’s term.

I’ve got my work cut out for me, but I’m excited. We’ll be able to get back the seat that Kelly Loeffler was in if we get our message out. We should be able to win back Arizona. I think we just have to, but there’s plenty of other states where there were close races in 2016 that we have a chance to get back.

Republicans have a tough map ahead of them on the Senate side and are playing defense in a number of battleground states for the Senate, with Sens. Ron Johnson (R-WI) and Marco Rubio (R-FL) up for re-election, while retiring GOP incumbents leave open seats in Ohio, Pennsylvania, and North Carolina. But if the GOP can net gain at least one seat, the Republicans will retake the Senate.