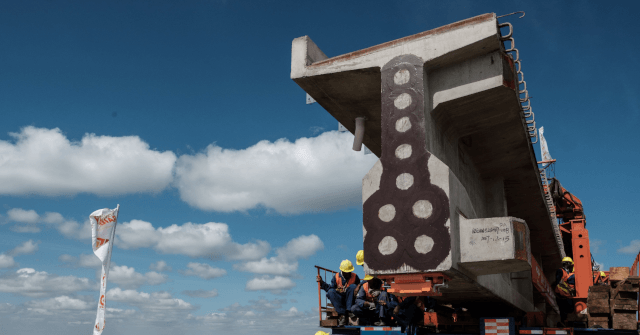 Kenyan authorities are seeking the deportation of four Chinese railway workers for a gang beating of a Kenyan engineer inspecting a project site under their supervision, local media reported this weekend.

The attack is the latest in a series of violent and sometimes racist incidents attributed to Chinese nationals working abroad, which have grown in number as Communist Party leader Xi Jinping expands the scope of his Belt and Road Initiative (BRI). The BRI is a global project intended to grant China full control of the world’s major roads, ports, and railways by investing in local transportation and indebting the domestic government.

Kenya has become an especially embarrassing stop on the Belt and Road, home to what Kenyan workers say is an “apartheid” worker system and myriad expensive infrastructure projects local media complain are rife with corruption.

Engineer Rodgers Imasa visited a rail project site managed by the China Railway No 5 Construction Company last week to inspect the work being done by imported Chinese laborers. According to two of Kenya’s top newspapers – the Standard and the Star – Imasa found the Chinese workers using low-quality materials to build the railroad that he, as the engineer in charge of the project, had not approved. Kenyans working at the site said the Chinese workers offered Imasa a bribe to continue using the materials they bought and not have their slight appear on their record. Imasa reportedly declined the offer, so the Chinese workers beat him.

“The conduct is against the contract of all staff including foreign ones. Consequently, KenNHA on May 21, 2019 expelled the staff from the project site forthwith and has recommended the cancellation of their work permits,” agency assistant director Charles Njogu said in a statement.

Shortly following the incident, the Kenyan workers remaining on the site went on strike, arguing that the Imasa incident was not uncommon and vowing not to return to work until they felt that their physical integrity was secure while working with Chinese nationals.

“There is no way we can work with people who frustrate and attack us in our daily duties. If it was a case where a casual worker had attacked the Chinese they would have reacted faster,” the leader of the Kenyan workers, Wilberforce Dida, said. “Our people are being assaulted every day. The company is not taking workers’ safety measures seriously. We have cases where 15 local [sic] have been injured while on duty.”

Dida said most of the attacks by Chinese workers were triggered by disputes over minor mistakes in the construction process. Dida is also the source of the claim that the Chinese men who attacked Imasa were upset he did not take a bribe.

On Thursday, Chinese Ambassador to Kenya Wu Peng said that he supported the double punishment of the Chinese nationals – in both Kenya and China.

“Our citizens must respect the rule of law in Kenya. They should do the right thing and get permits and licences where necessary,” Wu said in a meeting with Kenyan Deputy President William Ruto. “If Kenyans have concerns about the Chinese, let us know; we must follow the order of the locals.”

The Chinese that the Communist Party approves to work on projects abroad have struggled to follow the order of the locals, particularly in Kenya. In September, Nairobi expelled a Chinese businessman named Liu Jiaqi after one of his Kenyan workers filmed him complaining about Kenyan locals, lamenting that they were not “like white people, like the Americans.”

“Every one, every Kenyan … like a monkey, even [Kenyan President] Uhuru Kenyatta. All of them,” Liu said in the video, which went viral in Kenya. “I don’t belong to [sic] here. I don’t like here, like monkey people, I don’t like talk with them [sic], it smells bad, and poor, and foolish, and black. I don’t like them.”

In a more recent scandal, Chinese workers tried to offer charity at a primary school in Baringo County. Hungry residents who came to an event they were told was meant to distribute food aid found barrels of beer, instead. The beer caused pandemonium as young men elbowed through children, elderly, and the sick to take the beer. They destroyed packages of actual food aid along the way.

“We decided to include beer in the food donation after we realized they like beer,” said Khan Ke, the director of the Chinese contractor that organized the event, later said.

Locals described the Chinese charity as a “mockery.”

Kenya’s Standard has also uncovered ample evidence of corruption in Chinese infrastructure projects. Most recently, in mid-May, the Standard revealed a corruption scheme that cost the country up to 22 billion shillings (nearly $220 million) through a plan to build a new terminal at Nairobi’s Jomo Kenyatta International Airport (JKIA).

Outside of Kenya, China is also dealing with the aftermath of a violent assault by one of its citizens in Pakistan. An unidentified Chinese man threw a local worker into a furnace last week, allegedly because he felt the Pakistani worker did not sufficiently understand his instructions.