Former New York City Mayor Bill de Blasio is reportedly ready for Washington and a tilt at a U.S. House seat just weeks after he left his former post.

Both the New York Post and Politico cited people with insight into the former mayor’s thinking Wednesday, claiming de Blasio is eyeing a run in New York’s 11th Congressional District after redistricting expanded it to include Park Slope, where the aspiring Democrat Congressman lives.

The speculation seems to affirm de Blasio’s comments last month when he said he might be stepping down after two divisive terms in office but he has no intention of abandoning personal political ambitions, as Breitbart News reported.

The Hill reports any such de Blasio move means a face off against former Democratic Rep. Max Rose (N.Y.) in what would likely be a contentious primary. Rose is vying for his old seat after losing to sitting Rep. Nicole Malliotakis (R) in 2020.

The LAST person to be telling others what to do or how to lead should be failed Leftist Democrat New York City Mayor Bill de Blasio. https://t.co/X66UWZWLze

The New York State legislature approved a new congressional map on Wednesday that could assist Democrats in flipping as many as three House seats in November. 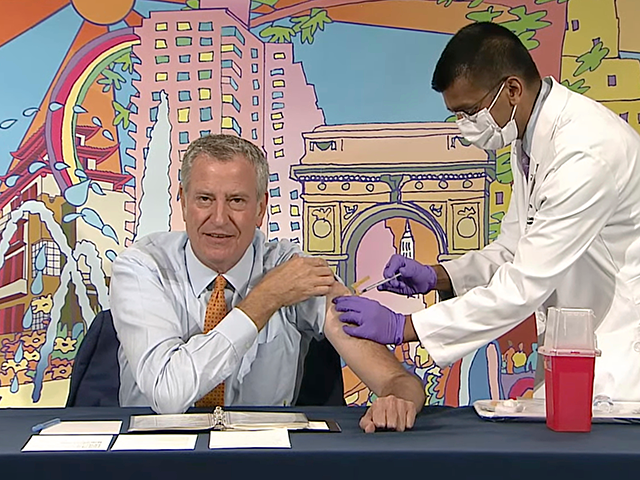 Malliotakis slammed the new lines as “a blatant attempt by the Democrat leadership in Albany to steal this seat, even after New Yorkers voted twice by ballot referendum for non-partisan maps,” according to Politico.

Rose has not shied from publicly expressing his disapproval of de Blasio. In 2020, the then-congressman released an ad saying “Bill de Blasio is the worst mayor in the history of New York City.”

Rose also knocked the determined leftist Tuesday evening in an email blast to supporters. The subject of the message was “De Blasio running against me (swear this isn’t a joke),” according to the Post.

“Former New York City Mayor Bill de Blasio has never been my biggest fan, but now he might be my primary opponent,” Rose wrote, according to the newspaper. “I know, I laughed at first too, but the implications aren’t funny.”

De Blasio served as mayor of New York from 2014 until 2021. He was barred by term limits from running for reelection.

Last month De Blasio said he will not run for governor of New York, ending speculation about his intentions to do so, as Breitbart News reported.

Bill de Blasio’s tenure, particularly over the last year, was marked by the aggressive actions he took to usher in vaccine requirements.

Most notably, he introduced the Key to NYC Pass, requiring businesses to discriminate against unvaccinated patrons and deeming the voluntary phase of getting the jabs “over.”