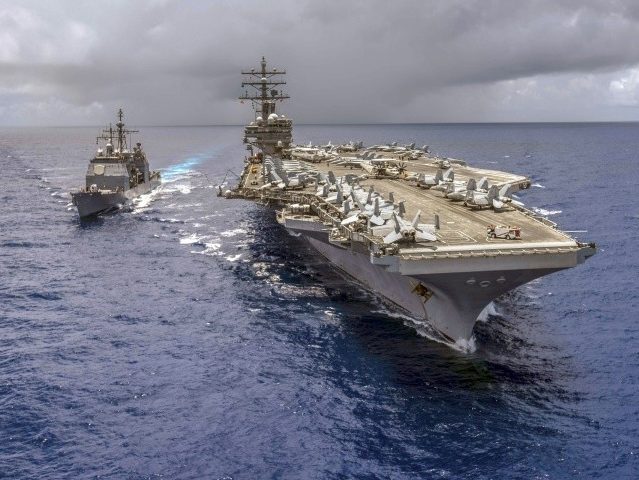 The U.S. Navy deployed its guided-missile destroyer USS McCampbell near Russia-contested waters in the Sea of Japan on Wednesday as it begun taking the necessary steps to sail a warship into the Black Sea, west of Russia, amid increased tensions in the wake of the Kremlin’s seizure of three Ukrainian military vessels.

The Kremlin claims ownership of the entire Peter the Great Bay region, named after the first emperor of Russia.

In a statement to CNN, U.S. Navy Lt. Rachel McMarr, a spokesperson for the American Pacific Fleet said, the USS “McCampbell sailed in the vicinity of Peter the Great Bay to challenge Russia’s excessive maritime claims and uphold the rights, freedoms, and lawful uses of the sea enjoyed by the United States and other Nations.”

The missile destroyer conducted what the U.S. Navy describes as Freedom of Navigation Operations (FONOP), aimed at challenging nations that claim sovereignty over waters beyond the 12 nautical miles of their coasts guaranteed by international law.

CNN learned from the U.S. Navy that the United States does not recognize Russia’s claims on Sea of Japan waters, noting that Kremlin claims ownership of areas that far exceed the 12 miles from the Russian coastline.

The US military has requested that the State Department notify Turkey of its possible plans to sail a warship into the Black Sea, three US officials tell CNN, a move they said is a response to Russia’s actions against Ukraine in the Kerch Strait, which connects the Black Sea and the Sea of Azov.

U.S. Navy personnel have not sailed in vicinity of the Peter the Great Bay, near the Russian Pacific Fleet base in Vladivostok, “since 1987,” amid Cold War tensions with the former Soviet Union, CNN noted, adding:

The US is required to notify Turkey about the passage through the straits under the Montreux Convention, a 1936 treaty that governs the passage of military vessels through the Bosporus and the Dardanelles, which connect the Mediterranean to the Black Sea. Under the rules of the treaty, countries that do not have a coastline on the Black Sea are required to provide Turkey with at least 15 days’ notice prior to transiting the straits.

The U.S. Navy noted that it is positioning itself to be able to respond to threats against its interests in the Black Sea.

“Our US 6th Fleet is always prepared to respond where called,” Cdr. Kyle Raines, a spokesman for the Fleet, which oversees naval operations in the region, told CNN, adding, “We routinely conduct operations to advance security and stability throughout the US 6th Fleet area of operations to include the international waters and airspace of the Black Sea.”

“We reserve the right to operate freely in accordance with international laws and norms,” he also said.

The anti-Russia deployments and preparations by the U.S. Navy come amid heightened stress between Moscow and the West over Russia’s seizure of two small Ukrainian military ships, a tugboat, and their crews on November 25.

The incident took place near Crimea, a former Ukrainian territory on the Black Sea annexed by Russia in 2014, triggering sanctions from the West.

U.S. Secretary of State Mike Pompeo, speaking at a NATO conference in Brussels Tuesday, said the alliance “will collectively develop [a] set of responses that demonstrate to Russians this behavior is unacceptable.”

During the same event, NATO Secretary General Jens Stoltenberg reportedly declared that the U.S.-led alliance had intensified its presence in the Black Sea region in response to what he described as “Russia’s aggressive actions.”

“We will continue to assess our presence in the region,” he proclaimed.