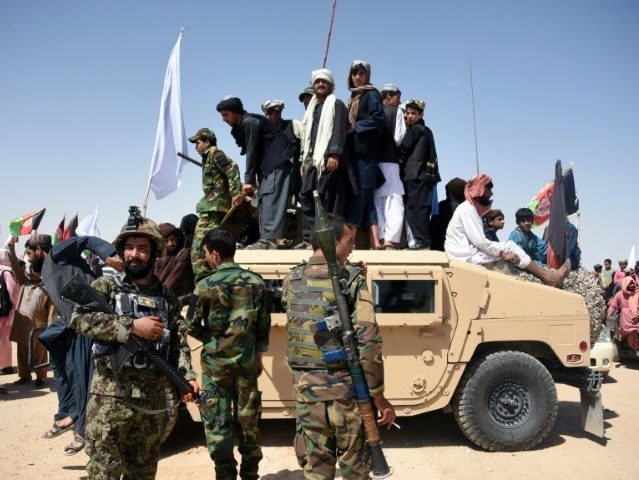 An Indian newspaper on Tuesday accused the U.S. government of underestimating the Taliban’s strength and influence as American officials continue in their efforts to convince the terrorist group to engage in peace talks with the Afghan government.

The Times of India (TOI) noted that there are at least 77,000 Taliban jihadis fighting 207,000 U.S.-backed Afghan National Defense and Security Forces (ANDSF), which include police and military units.

The newspaper argued that the U.S. government “underestimates” the Taliban, placing their manpower at between 25,000 and 60,000, and “overestimates” the Afghan forces, asserting that 314,000 ANDSF troops are fighting the jihadis.

TOI reported, “Was the US’ decision to wind up its combat mission in Afghanistan in 2014 based on an inadequate estimate of the influence Taliban still exerts in the country and of the humanitarian challenges confronting its people? Experts say that the Taliban holds sway over a far bigger area than that acknowledged by the government.”

Citing the U.S. government and independent assessments, Breitbart News has repeatedly noted that the Taliban’s reach and manpower have reached unprecedented levels in Afghanistan when compared to all other periods since the start of the Afghan war in October 2001.

According to the latest assessment by the U.S. Inspector General for Afghanistan Reconstruction (SIGAR), a watchdog agency established by Congress, the Taliban controls or contests about 44 percent of Afghanistan.

The Long War Journal (LWJ), a component of the Foundation for the Defense of Democracies (FDD’s), believes the situation is much worse than what is acknowledged by the U.S. government agencies.

TOI noted that LWJ believes the terrorist group controls or contests 61 percent of the country. No matter the source or how you break down the figures, the common theme is that the Taliban is the most prominent group in Afghanistan and its influence and power has reached historic proportions.

Taliban terrorists are largely responsible for the tens of thousands of ANDSF and Afghan civilian deaths.

Despite the U.S. devoting most of its reconstruction effort funds to developing the Afghan forces to take on the Taliban, the terrorist group has continued to seize territory.

The Taliban’s strength has increased alongside the record cultivation and historical production of opium and its heroin derivative, the top financial sources for the terrorist group.

In the wake of an unprecedented three-day truce between the Afghan forces and the Taliban in June, President Donald Trump’s administration has intensified efforts to convince bring the jihadist group to the peace talks table.

The Trump administration has deemed “reconciliation” between Kabul and the Afghan Taliban the primary goal of its strategy to end the 17-year-old war.

India, which provides assistance to Afghanistan in its fight against the Taliban, recently urged Kabul to “take more action” against the terrorist group, the Indian Express reported Tuesday.

“The challenges posed by the deteriorating situation does not mean we ought to also stoically accept the death tolls as commonplace,” India’s Permanent Representative to United Nations Syed Akbaruddin reportedly said.

“These sanctuaries have, for years, provided safety for the dark agendas of ideologically and operationally-fused terror networks like the Taliban, Haqqani network, Daesh [Islamic State], Al Qaeda,” Akbaruddin declared.

Although the U.S. insists that peace talks must be Afghan-led, the U.S. has begun to participate in the negotiations.

In July, a top Trump administration official met with Taliban representatives to bring peace to Afghanistan.

More discussions are expected to take place in the coming days.

Currently, there are an estimated 14,000 U.S. forces and about 7,754 troops from NATO allies and non-NATO partner nations serving in Afghanistan.