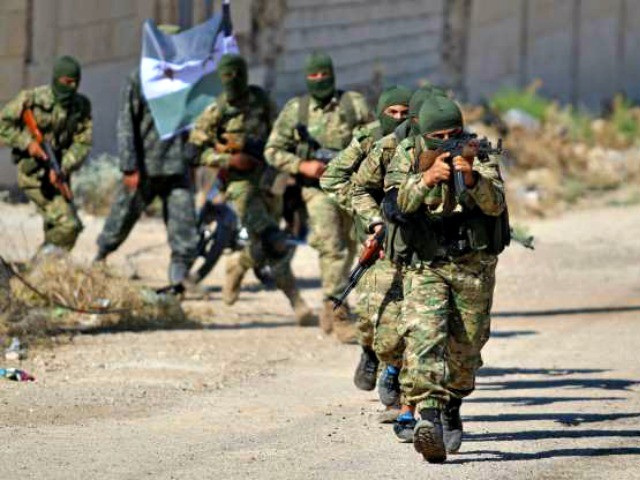 A Syrian rebel commander revealed on Thursday his coalition is conducting large-scale military exercises alongside U.S. Marines in the backdrop of the expected invasion of Idlib, the nation’s last rebel stronghold.

Colonel Muhanad al Talaa, the commander of the Pentagon-backed Maghawir al Thawra group, confirmed to Reuters that eight days of drills involving hundreds of U.S. troops in southern Syria came to an end this week. He said the exercise was intended to push Iran out of Syria entirely.

“These exercises have a big importance and have beefed up the defenses of the area and raised the combat capabilities and morale and that of civilians in the area,” said Talaa. “We are staying whether the Russians or Iranians want or not.”

“The American position has changed completely toward the Iranians. Before it was just putting a line to the Iranians not to approach the areas,” he continued. “If Tehran does not respond to the demands of the Americans there is a big likelihood they will be hit. It’s inevitable the Iranians leave Syria. This should happen quickly and in a decisive way.”

A Pentagon spokesman later claimed the show of force was intended to show Moscow and Tehran to engage in “deconfliction” channels and prevent “miscommunication or escalate tension.”

“The exercise was conducted to reinforce our capabilities and ensure we are ready to respond to any threat to our forces within our area of operations,” Colonel Sean Ryan told the agency.

The exercises took place in the U.S’s Al-Tanf base in southern Syria, where the military declared a 55 km (35 mile)-radius “deconfliction zone” while it was fighting the Islamic State.

The zone has angered both Russia and Syria, who have repeatedly called for the U.S. to leave the area entirely. It currently serves as a place refugee for at least 50,000 civilians living its Rukban camp.

The revelation raised questions as to whether the Trump would consider further use of military force against the Assad regime, having previously ordered precision missile strikes in response to evidence of chemical weapons attacks.