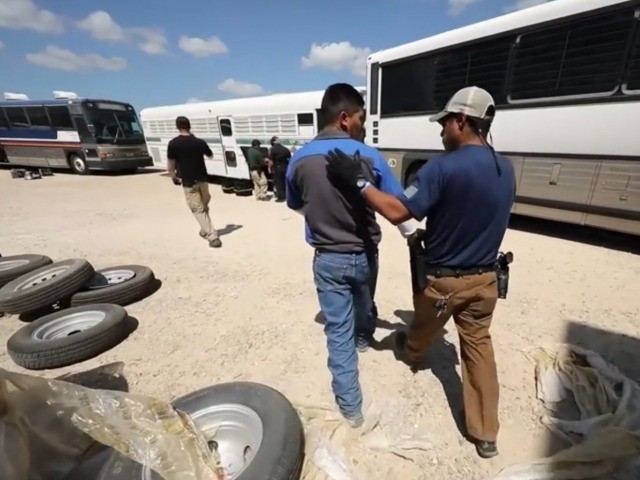 ICE arrests of noncriminals increased 66 percent in the first nine months of the 2018 fiscal year over the same period a year earlier. Arrests of convicts, meantime, rose nearly 2 percent. More noncriminals have also been deported …

The result is immigration courts are filling with defendants like Ruben Moroyoqui, a 45-year-old mechanic in Tucson, Arizona, whose only run-in with police came last year, his attorney said, when he was pulled over while picking up auto parts.

First, the officer asked for his license. His second question, Moroyoqui said, was “Are you here legally?” He wasn’t cited for any driving violation; he was simply handed over to ICE, which began proceedings to deport him to Mexico. An appeal is pending.

The arrests are rising partly because ICE is inspecting more employers who hire many illegal immigrants.

However, even Trump’s deportation rates are still low given the nation’s huge population of illegal immigrants, which is estimated to include from 11 million to 22 million illegals.

But Trump’s extra enforcement is opposed by pro-migration Democrats and by business-first Republicans.  The political pressure has resulted in Congress opposing Trump’s efforts to build the wall and expand enforcement measures.

But the GOP-led House appropriations committee only approved money for 400 additional law enforcement officers and support staff, and to operate only 44,000 detention beds.

the bill funds an average daily population of 40,520 adult and family detention beds, the same as the fiscal year 2018 enacted amount. The bill rejects the President’s request to hire 3,300 new ICE employees to support his executive order on immigration.

Trump asked for $5 billion to extend the border wall, but the Senate only approved $1.6 billion.

The House DHS bill — prepared by Kansas Rep. Kevin Yoder — also includes provisions to greatly expand the inflow of temporary workers. The extra foreign workers are intended to pressure down wages and salaries for blue-collar and white-collar Americans.

Amid opposition from Congress, Attorney General Jeff Sessions is using his legal authority as attorney general to reform the border rules and immigration courts, and to send more migrants home.