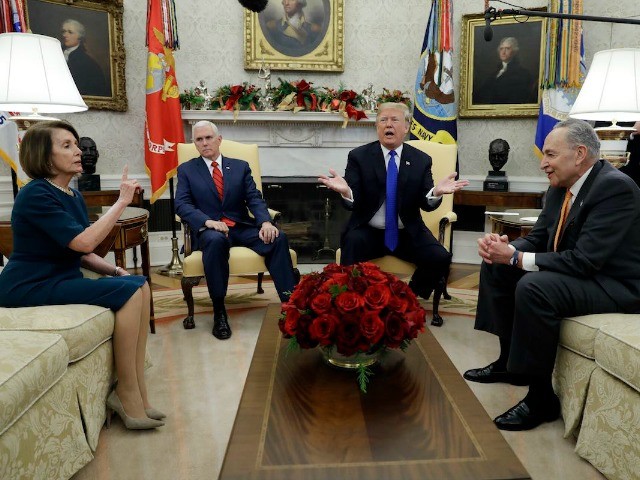 President Donald Trump reportedly told House Minority Leader Nancy Pelosi (D-CA) and Senate Minority Leader Chuck Schumer (D-NY) on Tuesday that he would push Republican senators in the next Congress to back compromise pieces of legislation that can get through the House.

According to a Tuesday evening New York Times report, Trump “went into a lofty speech during the Oval Office session, once reporters had departed, in which he mused about the potential for him to work alongside Democratic leaders in the new Congress to strike great deals.”

After the theatrics over border-wall funding and a potential government shutdown ended at the White House on Tuesday, Trump reportedly told Pelosi, who is set to regain her Speakership, and Schumer that the next Congress has the potential to be the “greatest Congress in the history of Congress.”

Trump reportedly assured “Chuck and Nancy” that “if they could strike deals that could get through the House, he would compel Republican senators to back them.”

Pelosi and other top Democrats have not made it a secret that they intend to push a big immigration bill in the next Congress, with Pelosi saying she wants to prioritize an amnesty bill for “patriotic” Dreamers and House Minority Whip Steny Hoyer (D-MD), who will become the next Majority Leader, saying earlier this week that Democrats will try to pass an amnesty bill that Dreamers and other immigrants “deserve” “as early as possible” in the next Congress.