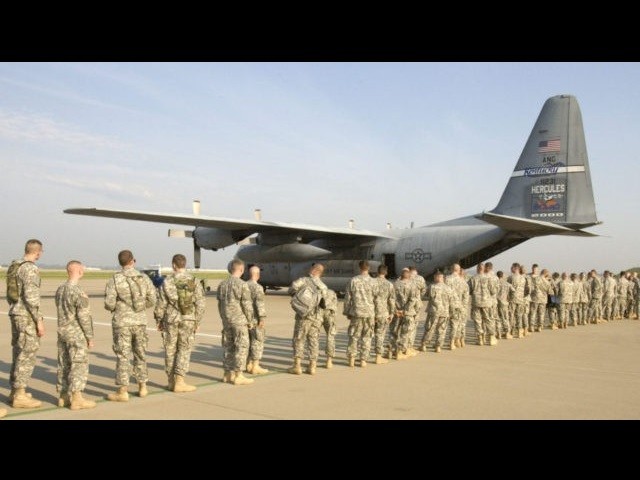 Reports on Monday indicate that President Donald Trump will order an expansion of the U.S. military deployment to the U.S. southwest border. The order is expected to increase the number of troops being deployed from 800 to 5,000.

The Wall Street Journal reported on Monday morning that the U.S. military plans to deploy 5,000 troops to the southwest border region in response to the caravan of “would-be asylum seekers.” The plans reportedly call for 1,800 troops to deploy to Texas, 1,700 to Arizona, and 1,500 to California.

A Pentagon spokesman did not appear to deny the reported deployment expansion. Rather, the spokesman said the discussion of the actual figures is “premature.”

Under “Operation Faithful Patriot,” troops are expected to be assigned to ports of entry in the early phase. They are expected to support Border Patrol agents and U.S. Customs and Border Protection (CBP) officers in dealing with the anticipated migrant caravan arrivals.

The troops are expected to come from about ten U.S. Army installations. The composition of the forces is expected to include military police, engineers, and medical personnel.

CBP Commissioner Kevin McAleenan said his agency is updating “longstanding plans to deal with a mass migration situation.” Those plans include temporary holding and processing facilities, he said.

McAleenan said he plans to ensure the CBP can “secure the ports (of entry) and prevent a large group from coming at one time.”

Over the weekend, Mexican authorities offered to provide asylum, jobs, and education and health benefits to the migrants in the Central American caravan headed north from Guatemala, Breitbart News’ Ildefonso Ortiz and Brandon Darby reported. The migrants soundly rejected the offer — instead, they stated their intention to migrate to the U.S.

Thank you but no was the response from a group of migrants in Arriaga, Mexico. “No, we’re heading north.”

Another migrant, 58-year-old Oscar Sosa, told the reporters, “Our goal is not to remain in Mexico. Our goal is to make it to the (U.S). We want passage, that’s all.”

On Sunday, Ortiz reported that another caravan of migrants violently stormed the Guatemalan northern border in an attempt to force their way into Mexico. Video reports from the border showed the migrants throwing rocks and other projectiles at Guatemalan border authorities. The group eventually broke through the Guatemalan border gate but appeared to be blocked from entering the Mexican port of entry.

President Trump is expected to make a speech on Tuesday to outline other actions he plans to take to stop the migrant caravans from successfully entering the U.S. Those could include a national security-based executive order to limit or halt the migrant’s ability to make asylum claims at the border.

“Please go back, you will not be admitted into the United States unless you go through the legal process,” the president wrote in a Twitter post. “This is an invasion of our Country and our Military is waiting for you.”

“Please go back, you will not be admitted into the United States unless you go through the legal process,” he tweeted. “This is an invasion of our Country and our Military is waiting for you.”

Many Gang Members and some very bad people are mixed into the Caravan heading to our Southern Border. Please go back, you will not be admitted into the United States unless you go through the legal process. This is an invasion of our Country and our Military is waiting for you!